A message of peace and freedom from Bosnia 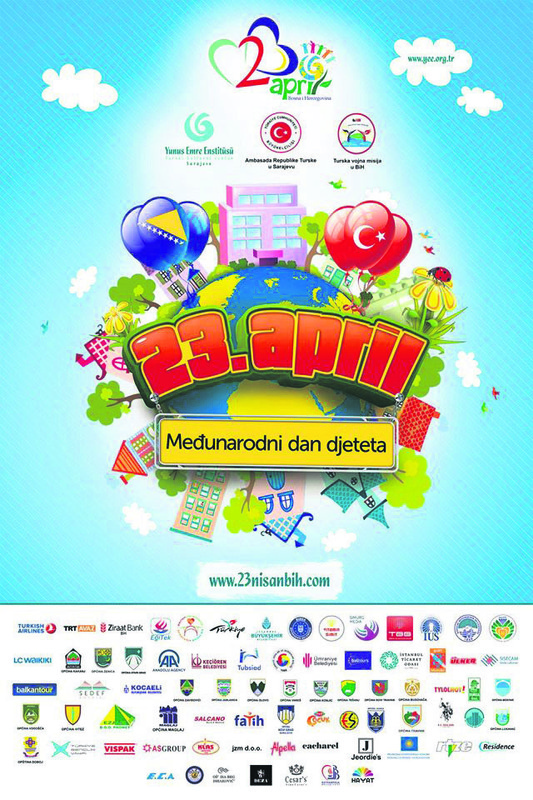 by Zeynep Esra İstanbullu Apr 24, 2015 12:00 am
The Yunus Emre Institute sent a message of peace and freedom to the whole world during a celebration event organized as part of the "Gönül Coğrafyamda 23 Nisan" (April 23 in the Geography of My Heart) program held in Zenica, Bosnia-Herzegovina. More than 5,000 students from different cities in Bosnia attended the celebration, which marked National Sovereignty and Children's Day yesterday. Striving to promote the values and beauties of the nation, the Yunus Emre Institute attracted the interest of Bosnian students during the Children's Feast, which took place at the Zenica Arena Indoor Sports Hall. The program was broadcast live on state-run Turkish Radio and Television Corporation's (TRT) Turkic and Balkan-focused channel "TRT Avaz," as well as by state and private television channels of Bosnia. The ceremony was overseen by representatives from the Bosnian government and other countries including Turkey. Various concerts, special performances, informative videos, folk dance performances and lotteries took place, and children had an unforgettable time. Children who are learning Turkish asked for peace around the world during the event. The Bosnia-based Turkish institute, with whom Turkey has a strong alliance and historical bond, has made significant efforts to include Turkish in the curricula of Bosnian schools. There are 450 students studying in the Turkology departments of universities, and more than 100 students are continuing Turkish courses. The celebration began with the national anthems of both countries as children waved national flags. A peaceful and friendly atmosphere was observed in the arena. The mayor of Zenica and the president of the Turkish Delegation Committee stressed the importance of peace and collaboration between the two countries, underlining the significance of children for a bright future. Additionally, the president of the Yunus Emre Institute said it is necessary to educate the engineers, teachers and physicians of the future. Bosnian children with leukemia presented gifts to Turkey's ambassador to Bosnia-Herzegovina, and a Bosnian folk dance team performed a traditional dance that originated in Turkey's Black Sea Region. Children with physical disabilities and Down syndrome also performed folk dances.

About the Yunus Emre Institute

With the various centers it has established all around the world, the Yunus Emre Institute is conducting educational and training projects along with organizing culture and art events. The institute, which also tries to support scientific research, currently has 30 centers abroad and offers Turkish classes to anyone interested in learning Turkish. Founded in 2009, the institute brings together leading names from the culture and arts world in various seminars, symposiums, conferences and panels organized around the world. In order to promote and introduce Turkish music, modern and traditional Turkish handcrafts, theater, cinema, photography, literature, Turkish cuisine and other aspects of Turkish culture, as well as to share the rich culture of Turkey with the world, the institute organizes concerts, exhibitions, workshops, performances, film screenings, scientific meetings, intellectual meetings, art courses and other similar activities and events. There are more than 5,000 students learning Turkish at the Yunus Emre Institute in Bosnia.
RELATED TOPICS