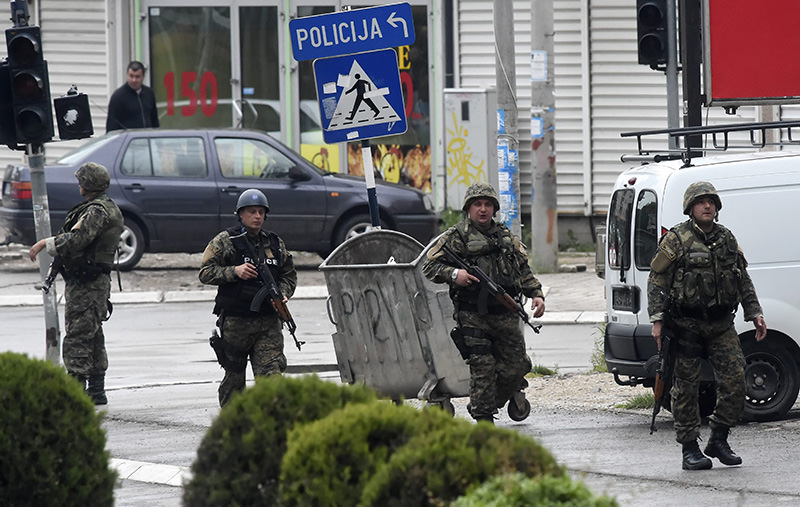 Police officers walk on a street as Macedonian special forces engage in a police action against an alleged group of unidentified armed group, in Kumanovo, the Former Yugoslav Republic of Macedonia, 09 May 2015 (EPA Photo)
by Compiled from Wire Services May 10, 2015 12:00 am
Meanwhile, Kosovo has condemned 'any involvement' of its citizens in Macedonia shootout on Monday, AFP has reported.officers and 14 armed Albanians have been killed in a day-long gun battle in a city in northern Macedonia, the Interior Ministry said on Sunday.

Fighting in Kumanovo, a town of mainly ethnic Albanians, 40 kilometres north-east of the capital Skopje, has now subsided and the city is under police lockdown, Interior Ministry spokesman Ivo Kotevski said.

The Interior Ministry said 14 gunmen were killed but gave no information on civilian casualties during the clashes that began in Kumanovo.

A Reuters photographer said Kumanovo was tense but relatively calm on Sunday, with sporadic gunfire.

A police source said police were "still trying to break the remaining elements of the terrorist group".

Meanwhile, Kosovo has condemned 'any involvement' of its citizens in Macedonia shootout on Monday, AFP has reported.

The events will deepen concern in the West over stability in Macedonia, where the government is on the ropes over allegations by the main opposition, the Social Democrats, of illegal wire-tapping and widespread abuse of office.

Protesters demanding the resignation of conservative Prime Minister Nikola Gruevski clashed with police this week and the opposition is threatening to rally thousands on May 17.

Observers fear political leaders on either side may try to stoke ethnic tensions as leverage.

An Interior Ministry spokesman said on Saturday the group in Kumanovo was planning "terrorist acts" and had "infiltrated" the country from a neighbouring state, without saying which.

Macedonia's neighbours are Albania, Greece, Kosovo, Serbia and Bulgaria. Macedonia has previously identified armed men in the country as coming from Kosovo. Last month, a group of ethnic Albanians from Kosovo briefly took over a Macedonian police station demanding the formation of an Albanian state in Macedonia.

An estimated 30 percent of Macedonia's 2 million people are ethnic Albanians. Guerrillas took up arms in 2001, clashing with security forces before the West brokered a peace deal offering the Albanian minority greater rights and representation and the insurgents entered government. Ethnic tensions have been simmering in Macedonia for over a decade despite the peace deal.

But implementation has been slow and tensions sometimes flare. Many citizens, regardless of ethnicity, are frustrated at the slow pace of development and integration with the West. Macedonia's bid to join the European Union and NATO is blocked by a long-running dispute with Greece over the country's name.
Last Update: May 11, 2015 4:58 pm
RELATED TOPICS