Tens of thousands rally for Macedonia PM as opposition digs in 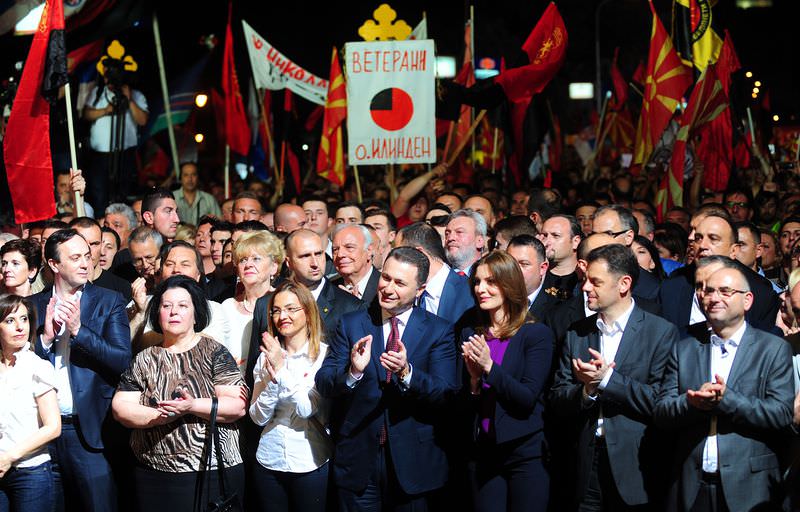 by May 19, 2015 12:00 am
Tens of thousands of supporters of embattled Macedonian Prime Minister Nikola Gruevski took to the streets of the capital in a show of strength on Monday, a day after a huge opposition protest called on him to resign. While supporters of Gruevski rallied, around 1,000 opposition demonstrators also set up a protest camp outside his offices as a political crisis in the Balkans country deepened. The pro-Gruevski demo, which included some 30,000 people, took place outside the parliament building, some two kilometers away from where opposition supporters were camping out, according to AFP journalists. The center-left opposition is seeking the conservative premier's resignation, accusing him of corruption, mass wiretapping and fomenting ethnic tensions to hang onto power. But on Monday Gruevski repeated that he did not intend to step down, although he admitted "mistakes and omissions" that he pledged to correct. "No surrender, no bowing down! ... Dark forces will not succeed," Gruevski, 44, told the crowd as supporters waved the country's red and yellow flag and chanted "Macedonia! Macedonia!" and "Nikola! Nikola!" Without providing evidence, he again accused the opposition of being backed by foreign intelligence that would like to see him quit. "We are open for talks (with political parties) but we will not allow a solution which is against the free will of the majority of citizens."

Monday's rally, held under the motto "Strong Macedonia," was organized in response to Sunday's march through Skopje by about 20,000 opposition supporters seeking the resignation of Gruevski, in power since mid-2006. No incidents were reported on either day. Meanwhile, the premier's detractors were digging in their heels after opposition leader Zoran Zaev urged them to stay on the streets in front of Gruevski's neo-classical government headquarters "until he goes". Heeding his call, hundreds of anti-Gruevski demonstrators set up camp on a lawn in the middle of a boulevard facing the prime minister's offices. The site took on a festival atmosphere with dozens of brightly coloured tents grouped around a small stage, some decorated with signs reading "Resignation!" and "Goodbye Nikola" as music blared from nearby loudspeakers. "We are writing history at this very moment," smiling Zaev, 40, told his supporters.

Police closed off part of the boulevard, causing a traffic jam that prompted local media to urge citizens to avoid the city center. The rival demos have highlighted the deep divisions that plague the tiny Balkans country, which has been dogged by a political crisis since disputed elections last year and has been left reeling after a bloody clash between police and ethnic Albanian gunmen left 18 dead earlier this month. The deadly shootout in the northern town of Kumanovo was the worst violence since the country narrowly avoided civil war after an Albanian uprising in 2001.

Separately, two key ministers and the intelligence chief stepped down last week after being linked to a long-running scandal in which Zaev's opposition accuses the ruling party of wiretapping up to 20,000 people, including politicians, journalists and religious leaders. Zaev, of the Social Democratic Union of Macedonia (SDSM), has released snippets of the alleged recordings that appear to show widespread government corruption, a murder cover-up and other wrongdoings. Sunday's march called by the opposition SDSM brought many ethnic Albanians and Turks onto the streets as well as protesters from the majority Macedonian community. Ethnic Albanians make up about one quarter of Macedonia's 2.1 million population. Under pressure from the European Union, which Macedonia has applied to join, leaders of the country's four main parties met on Monday to try to defuse the crisis, but talks hardly got off the ground. "We have not opened talks on any issue, because we first need to solve certain things," Zaev told reporters after the meeting. He said the issues included the equal status of all the participants "and guarantees on implementation of everything that would be agreed". He repeated that his party insisted that an interim government be formed without Gruevski in it.

At the colorful opposition demonstration in front of the prime minister's office, protesters vowed to hold firm. "I will stay here until Gruevski steps down," protester Sime Kardanovski, 38, told AFP. But those at the rival rally labelled such a scenario highly unlikely. "Zaev is wasting his time. Even if early elections will be held he would lose," Vlatko Aleksov of Skopje told AFP.

In Brussels, NATO Secretary General Jens Stoltenberg said the alliance was closely following developments in Macedonia and stressed the necessity of avoiding violence and any escalation of the crisis. Macedonia obtained EU candidate status in 2005, but is yet to begin accession talks due to opposition from Greece. Athens denies its neighbor the right to use the name Macedonia, arguing it implies a claim on the northern Greek region of the same name. At Monday's rally Gruevski stressed that "Macedonia's future lies in EU and NATO."
Last Update: May 19, 2015 10:51 pm
RELATED TOPICS