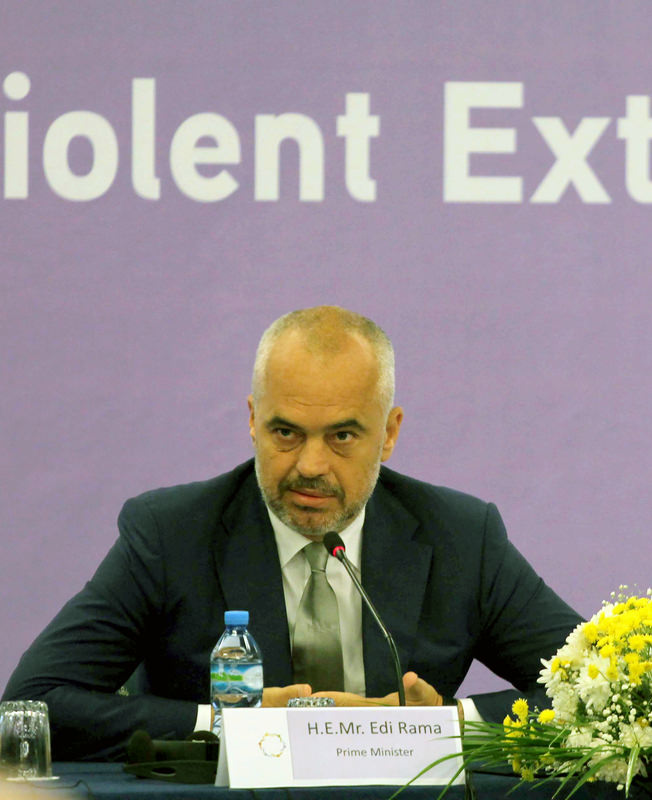 by Daily Sabah with AA May 20, 2015 12:00 am
Albania threatened on Wednesday to veto Macedonia's entry into NATO, if the fragile Balkan country does not implement the Ohrid Agreement, which aims to grant more rights to the Albanian ethnic minority living in the country.

Speaking on the second day of a Balkans regional summit on countering violent extremism, Albanian Prime Minister Edi Rama on Wednesday said only a Macedonia that included all ethnic backgrounds could be part of NATO.

"Macedonia cannot be part of it [NATO] before implementing in spirit and letter the principles that make NATO not just a military alliance, but an alliance of democratic nations in defense of peace and the right of people to live in liberty."

"This also means, that Macedonia cannot become part of NATO without guaranteeing in the spirit and in letter the Ohrid Agreement," Rama said, referring to a 2001 peace deal following a conflict opposing Macedonians and Albanians. Albanians have claimed that the agreement had not been implemented.

The threat made by the Albanian Prime minister, the first public one by Albania regarding Macedonia's NATO membership, comes more than a week after 22 people, including eight police officers, were killed during clashes between security forces and an armed group in the city of Kumanovo, near the Kosovo border, mainly inhabited by ethnic Albanians.

Rama said that in Kumanovo, words "terrorist" and "Albanian" had been intentionally merged in what he called "dangerous effort to give terrorism an ethnic suffix, and the ethnicity a prejudicial prefix".

"This is unacceptable not just for us, but also for the interest of Macedonia," Rama said.

Ethnic tensions are regular in the multi-ethnic country, where about a quarter of the population of 2.1 million is ethnic Albanian.

It is also in the middle of severe political turmoil as two senior ministers and an intelligence chief in Macedonia resigned last week, amid a political crisis fueled by a wiretapping scandal.

Indeed, the head of the Social Democrat Party - the main opposition party in Macedonia - Zoran Zaev has divulged since February scores of recordings, claiming that the prime minister Nikola Gruevski and the intelligence chief Saso Mijalkov had ordered the illegal surveillance of up to 20,000 people, including ministers and journalists.

Macedonia declared its independence from Yugoslavia in 1991 and was about to join NATO in 2009, along with Albania and Croatia, but Greece vetoed the historic move.

Macedonia and Greece have been at odds for years over the Balkan country's name, which Athens believes creates confusion with its own region of Macedonia.
Last Update: May 20, 2015 7:22 pm
RELATED TOPICS