Srebrenica survivor: ‘We feel the same pains every day' 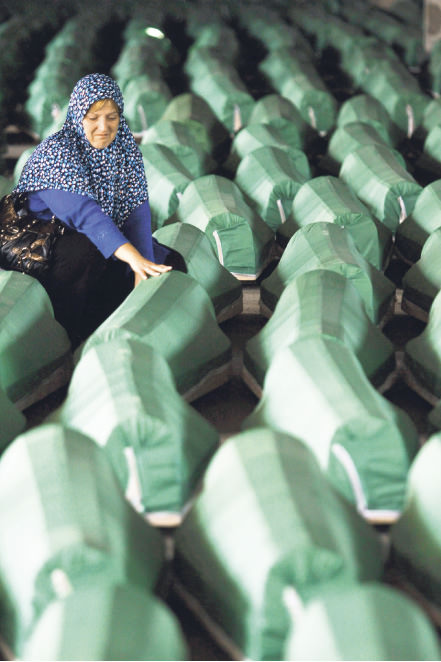 by Anadolu Agency Jul 07, 2015 12:00 am
It is July 10, 1995, a day before the fall of Srebrenica and what will be the largest mass murder in Europe since World War II. "Groups of people are saying that 'Srebrenica is falling'. The crowd was running and I was frightened so I joined them without even seeing my family. "'Today is the Day of Judgment,' I was burbling," says a survivor of the genocide, Hasan Hasanovic. Hasan was only 19 years old when he left the eastern Bosnian town on the eve of its occupation by Serb soldiers. His ordeal would see him and thousands of other Bosnian Muslims walk 100 kilometers (60 miles) over the next six days to the relative safety of Tuzla city, as the country was torn apart by war.

However, thousands of Bosnian men and boys were killed, by pursuing Serb forces as they tried to make their way to the safety of Bosnian government territory. Srebrenica was besieged by Serb forces between 1992 and 1995 during the Bosnian War. Serb militias were trying to wrest territory from Bosnian Muslims and Croats to form their own state. The UN Security Council declared Srebrenica a "safe area" in the spring of 1993. However, Serb troops led by General Ratko Mladic, now facing genocide charges in The Hague, over ran the UN zone despite the presence of around 450 Dutch soldiers tasked with acting as United Nations peacekeepers. The Dutch troops failed to act as Serb forces occupied the area, killing about 2,000 men and boys on July 11 alone.

"I met my family in Srebrenica [10 July]. We spent the day in the house of a relative because we heard that NATO planned to bomb the Serb emplacements. We believed that NATO was going to end the war. "But instead Srebrenica fell on July 11 despite the NATO forces. People in the streets of Srebrenica were frightened. We all headed into the surrounding mountains. There among the thousands of frightened people, I lost my family. "I first planned to reach Zepa [a nearby town]; then, when we heard that Zepa fell as well, we went to Buljim. I was in the first group of people. There I found my father, my twin brother and uncle," says Hasan. Some 15,000 Srebrenica men fled into the surrounding mountains but Serb troops hunted down and slaughtered 6,000 of them in the forests. On the morning of July 12, as more attacks came from surrounding Serbs, people made an escape. Hasan never saw his father, uncle or twin brother again. "After the attacks stopped, we set off again but there was constant gunfire, and it was approaching," says Hasan. "I lost my strength due to the fear. I removed my backpack and coat to be lighter. I had a feeling that I had to move faster to survive. I did it; I walked faster than the line of people all day. My ankles were horribly swollen and bruised." On July 15, Hasan and the people in his group reached the last group of Serb forces. It was their last obstacle before arriving in territory held by the Bosnian government army. "We waited for a battle between the Bosnian forces and the Serbs to end. We waited for five or six hours. It was a great disappointment to come so close to free territory but be unable to get to it," he says.

After hours of waiting, Hasan and some others managed to reach Baljkovica, a village in the free territory, on July 16. Hasanovic describes the scene saying, "locals brought a lot of food and drinks. I think they brought everything they had. It was amazing". However, Hasan did not stay in Baljkovica. The day after, he climbed onboard a bus-without knowing its destination or if any of his family had survived. With his terrifying journey in his mind, he finally snatched a few hours of sleep. Then the driver of the bus woke him up. He had arrived in Tuzla where refugees were being housed at the city's airport. Hasan found his mother, younger brother and grandparents amid the field of white tents but it took many years to find out the fate that befell his father, brother and uncle. He eventually found his father and brother in separate mass graves, burying his father in 2003 and his brother in 2005. They now rest in the Srebrenica-Potocari Memorial and Cemetery for the Victims of the 1995 Genocide. His uncle has never been found.

Since 2005, thousands have attended the Mars Mira [Peace March] to mark the anniversary of the Srebrenica massacre, following the same forest path used by Bosniaks fleeing from the genocide.

A total of 6,166 victims have been buried at the memorial center; another 230 victims were laid to rest outside of the village of Potocari in July last year. Since the end of the conflict, hundreds of Bosniak families continue to search for missing people among the large numbers of civilians who were killed and thrown into mass graves around the country. As for Hasan, he now works as a curator at the Srebrenica-Potocari memorial center. "We who survived the genocide in Srebrenica live with it every day. We cannot get rid of those thoughts and images and if we go to America or Australia we have to live with that, " he says.
Last Update: Jul 09, 2015 7:20 pm
RELATED TOPICS