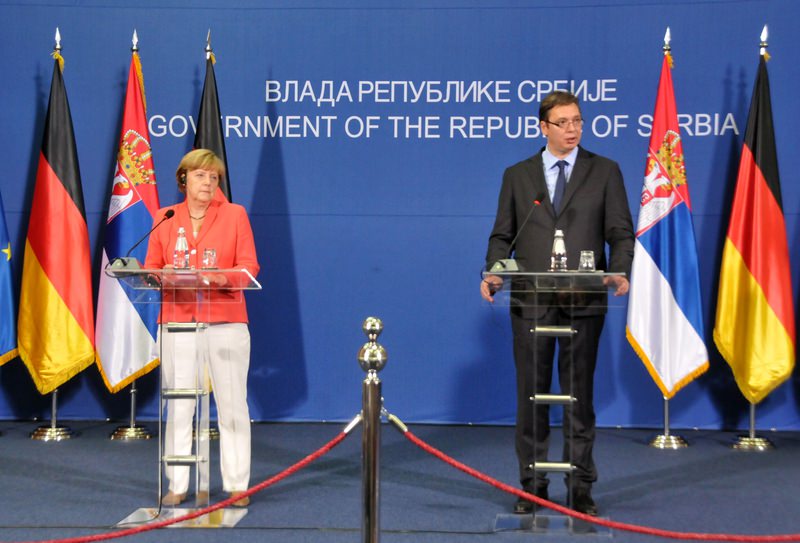 by Daily Sabah with Wires Jul 09, 2015 12:00 am
German Chancellor Angela Merkel assured several Balkan states on Wednesday that there would be no artificial delays on their drive to join European Union and said it was in the bloc's interests they make it in.

Speaking in Albania's capital during the first leg of a tour that will also take her to Serbia and Bosnia, Merkel said she had heard complaints from Balkan countries seeking entry to the bloc that the EU was stalling.

"May I tell you that it is in our own interests that our promise that the countries in the Western Balkans have a European perspective -- that we realise this perspective, because that concerns our credibility," Merkel said.

Balkan nations are likely to suffer spillover effects from the Greek debt crisis. Merkel's visit -- at a time when she herself is busy wrestling with the problems in Athens -- sends a signal that the region's stability is crucial to the EU.

Governments in the region fear their progress towards EU membership could stall because of enlargement fatigue inside the bloc and because Brussels is too preoccupied with saving the euro.

"I can tell you, nothing will be artificially delayed. There won't be any difficulties constructed ... I think it is widely recognised that Albania is taking big steps forward," Merkel said at a news conference alongside Albanian Prime Minister Edi Rama.

Of the Western Balkan countries, Slovenia and Croatia are already EU members. Serbia and Albania have been given candidate status but they have yet to start accession talks.

Macedonia's progress is stuck because Greece disputes its right to call itself by that name, which is also the name for a northern province of Greece.

"We must take things forward step by step, and here I want to say quite clearly that in my view this will only work if we have European perspectives for the countries of the Western Balkans not just on paper but if they become reality," Merkel said.

Rama, the Albanian premier, cited concern about "propaganda" which asserted that Albania's mixed Muslim and Christian population was getting in the way of its accession to the EU.
Merkel rejected the notion out of hand.

"Four million Muslims live in Germany, and we live well together. So the idea that we wouldn't want to have Albania in the European Union because Muslims live here and more Christians live in our country -- that is completely wrong."

In Belgrade, after meeting her Serbian counterpart Aleksandar Vucic, Merkel said Germany would intensify cooperation with Western Balkan countries to help them stem the influx of illegal migrants from the Middle East and Africa.

Migrants moving northwards from Greece are using Macedonia and Serbia as transit countries before crossing to Hungary and the rest of western Europe in the EU.

To stop the flow of migrants, Hungary has said it would erect a fence along its border with Serbia, a move condemned by the U.N. refugee agency. "Walls make no sense," Merkel said.
Last Update: Jul 09, 2015 1:09 am
RELATED TOPICS