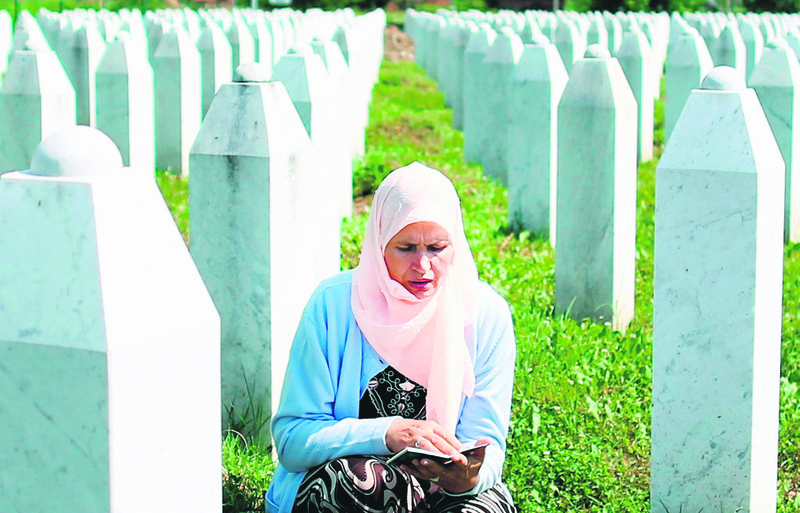 Two decades after Europe's worst massacre since World War II in which some 8,000 Muslim men and boys were slaughtered by Serbian forces in 1995, the Srebrenica massacre is being commemorated with the attendance of several leaders

Foreign dignitaries were starting to arrive in Bosnia on Friday to mark the 20th anniversary of Europe's worst massacre since World War II and attend the funeral of 136 newly found victims. Turkish Prime Minister Ahmet Davutoğlu and Jordan's Queen Noor were among early arrivals, and former U.S. President Bill Clinton was expected later in the day. Foreign Affairs chief Federica Mogherini is planned to represent the European Union at Saturday's commemorations. Some 50,000 people are expected to attend ceremonies mourning the 8,000 Muslim men and boys killed in the eastern Bosnian town of Srebrenica, which had been declared a safe haven for civilians by the United Nations. The event includes a funeral for 136 recently found victims identified through DNA analysis

On July 11, 1995, Serb troops overran the Muslim enclave. Some 15,000 men tried to flee through the woods toward government-held territory while others joined the town's women and children in seeking refuge at the base of the Dutch U.N. troops who were deployed to protect the town. But the United Nations did nothing to stop the fall of Srebrenica and the outnumbered and outgunned Dutch troops could only watch as Serb soldiers separated about 2,000 men from women for killing and later hunted down and killed another 6,000 men in the woods. The remains of Srebrenica victims are still being found in mass graves. So far, remains of some 7,000 victims have been excavated from 93 graves or collected from 314 surface locations and identified through DNA technology. Remains of more than 6,000 were buried again at the Potocari Memorial Center where Saturday's events will unfold, just across the road from the former U.N. base. Bosnian Serbs deny the killings were "genocide" and their leader, Milorad Dodik, called last weekend the number of victims a "lie." But Serbian Prime Minister Aleksandar Vucic will be representing Serbia at the commemoration. He said he wanted to bow his head before the victims of the "horrible crime".

This week, a proposed U.N. Security Council over a resolution that called the crime "an act of genocide" as two international courts already have labeled it was vetoed by Russia. Leaders of the Bosnian Serbs and Serbia, who have close religious and cultural ties to Russia, have lobbied President Vladimir Putin to vote "no." U.S. Ambassador to the U.N., Samantha Power said the veto was "a further stain on this council's record." U.S. Secretary of State John Kerry said Thursday that "this anniversary is a powerful reminder of the need to confront evil in all its forms, and to stand up for human rights and dignity."

Bosnia's war took 100,000 lives and ended with a U.S. - brokered peace agreement that divided the once ethnically mixed country in two mini-states one run by the Serbs, the other shared by the Bosnians and Croats. They are linked by a common government, parliament and three-member presidency where each group holds a veto.

Bosnians tried to defend themselves with a small number of weapons under the command of Alija Izetbegovic, the legendary president of Bosnia. Alija Izetbegovic, who brought independence to his home country and is known as the "Wise King" by Bosnians, he was born in 1925 in Bosnia and fought for Bosnian independence to prevent the massacre of Muslim Bosnians. In his early years, he was a member of the group Mladi Muslumani (Young Muslims), struggling to be a voice for Muslim Bosnians in the region. He was arrested in 1946 and spent three years in jail. In 1970, he wrote a book entitled "The Declaration of Islam" and delved into relations between Islamic and the Western values. His views and thoughts on civilization, culture and religion went beyond those of a politician, and he was labeled as a philosopher instead. He established the Democratic Action Party (SDA), was elected president and brought the independence vote to his people. A total of 99.4 percent of Bosnians voted for independence from the former Yugoslavia, and Bosnia and Herzegovina was recognized as an independent state in 1992. When the Serbs started attacking Bosnians and engaged in ethnic cleansing, Izetbegovic sided with his people and commanded forces against the Serbs. Through his patience and struggle, the war ended in 1995, and Bosnia and Herzegovina remained independent, according to the Dayton Agreement. Having struggled for his people and country, Izetbegovic, whose people embraced him as "father," became the first Chairman of the Presidency of Bosnia and Herzegovina. He served in this role until 1996 when he became a member of the Presidency of Bosnia and Herzegovina, serving until 2000. Izetbegovic was respected not only by Bosnians, but also by many Muslims from around the world, and he died in 2003.
Last Update: Jul 10, 2015 9:43 pm
RELATED TOPICS