Reasons for increased radicalization in Balkans must be investigated, experts say 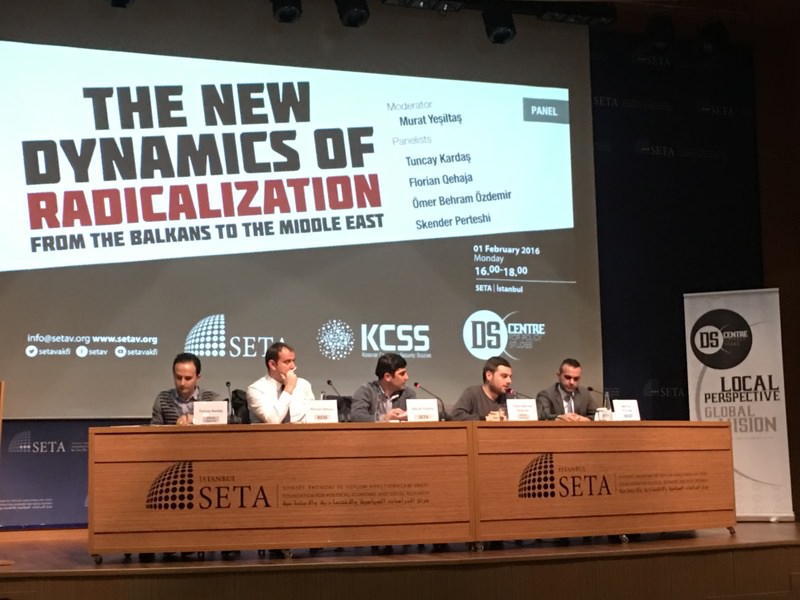 In a panel organized by The Daily Sabah Center for Policy Studies, Foundation for Political, Economic and Social Research (SETA) and Kosovar Centre for Security Studies (KCSS), experts suggested that the reasons behind radicalism must be explored, and policies must be adopted for prevention

In a joint event on Monday organized by the Daily Sabah Centre for Policy Studies, the Foundation for Political, Economic and Social Research (SETA) and the Kosovar Center for Security Studies (KCSS), prominent researchers, academics and an official from the Foreign Ministry discussed regional developments, focusing on growing radicalism in the Balkans and the Middle East and the fight against DAESH. Several senior journalists and academics attended the program, which was moderated by Murat Yeşiltaş from SETA. The first speaker was Tuncay Kardaş who is associate professor of international relations at the Middle East Institute of Sakarya University where he focuses on critical security studies, governmental security, visual semiotics and Turkish foreign policy. The second speaker, Florian Qehaja, is the executive director and one of the co-founders of the KCSS. He previously served as head of operations from 2008 to 2011 and has also been an assistant lecturer at various universities in Kosovo. The third panelist, Ömer Behram Özdemir, is an assistant at Sakarya University and focuses on foreign fighters. The final speaker was Skender Perteshi who also works for the KCSS and whose research interests include integrity in the security sector, defense reform, violent extremism and radicalization.

Since radicalism has the potential to become a significant threat to the national security of countries in the affected region, the panel discussed and analyzed radicalization, violent extremism and border security in the Balkans and the entire Middle East. The Daily Sabah Centre for Policy Studies outlined the goal for the panel on its website, stating that "The growing extremism across the world lures thousands of young people from several countries, including the most developed and least developed ones as militant uprisings have found safe havens in war-torn countries like Syria following the Arab Spring that euphorically swept across the region. On the contrary, the growing threat posed by the militant groups through recruiting foreign fighters from both regional and international actors have raised questions of why people join militant groups like DAESH and al-Qaeda, what governments can do to preclude their citizens from flowing into these groups, how war-torn countries cause border troubles for neighboring countries like Turkey, how the regional governments can cooperate, and what nongovernmental organizations (NGOs) contribute to the efforts of the government. The spread of radicalism in the Balkans poses a significant threat to the national security of Balkan countries, including Kosovo. The recently established country is considered under threat of radical ideology since several preachers are working on the ground to convince young Kosovars to adapt a different understanding of Islam that has a strict interpretation of scripture; contrary to Kosovo's traditional, indulgent and permissive Islamic understanding. In 2014, the killing of three Turkish citizens, including a police officer and a soldier, by two DAESH militants, one of whom was Kosovar, exemplified the growing threat in Kosovo in terms of the recruitment of youth. The panel explored the factors that lead to radicalization among Kosovars and how Turkey and Kosovo can work together against the security threat."

Kardaş said that the concept of radicalization is highly contested and that there is not a unified view on the issue. However, he also pointed to a general definition is supporting or perpetuating actions that aim to bring a fundamental change to society by threatening the political structure. He identified radicalized individual as those who profoundly want radical change in society. He said that there were four main approaches to radicalization: "The sociological approach to radicalization focuses on the lifestyles, economics and educational levels of individuals while the psychological approach deals with personal motivations. The social network approach suggests that individuals are radicalized after joining a small network. This approach also claims that it is important for those who are radicalized to be accountable to who you know and with whom you are in touch. The problem definition approach suggests that it should be inquired how individuals frame problems and what solutions they bring for those problems."

Qehaja mainly focused on radicalization in the Balkans "There are three ways of practicing Islam in Kosovo. One is secular, the second one is the traditional Hanafi [school] and the third refers to the radicals. A small portion of the third group has the potential to use force," he said. He underlined that the Wahhabi imams who are funded by foreign countries and impose a strict religious jurisprudence are luring young Kosovars who generally belong to poor families and have criminal pasts. "Three-hundred Kosovars have fled to Syria and Iraq," he said, but added that the number may increase if preventative measures are not taken. He suggested that returnees not be isolated and have to be re-integrated to society rather than being jailed. He said that some radicalized Kosovars regret their actions and come back to their country, and that the state has to learn from that experience to find the links. He said that the Islamic community and imams have to be involved in the de-radicalization process and that radicalized Kosovars with a very limited knowledge of Islam learn the religion from extremist imams.

Özdemir said that people with different motivations and backgrounds join fighting groups. For instance, he said that Turkish foreign fighters with religious motivations who join DAESH have participated in different wars and conflicts. "In the 1970s, the leftists joined in the Palestinian struggle against Israel while Islamists fought in Afghanistan and Bosnia," he said.

Perteshi said: "Radicalization is a big challenge to society and the state. It is a new phenomenon. Everybody deals with the consequences, but we have to investigate its reasons. More than 130 Kosovars were arrested on suspicion of having links to extremist groups. Extremist imams spread the word. A poor education system presents one cause. Kosovar extremists are generally from rural areas.

"Corruption, rule of law and an undeveloped economy create an environment where extremists can thrive. People 18 to 26 years of age travel to Iraq and Syria. They have no idea what traditional Islam is. They encounter the religion [of Islam] with the help of extremist imams and it is worrying to watch their numbers increase."

The four panelists agreed that the reasons of radicalization must be investigated and a way must be created for the re-integration of people reverting from their affiliation with terrorists. They also said that a Turkish-Kosovar cooperation will help to prevent the influx of radicalized Islamists and that Turkey would help Kosovo in terms of promoting traditional Islam as the majority of the two countries practice the same form of the religion.
RELATED TOPICS