Thousands of anti-Obama protesters clash with Greek police in Athens 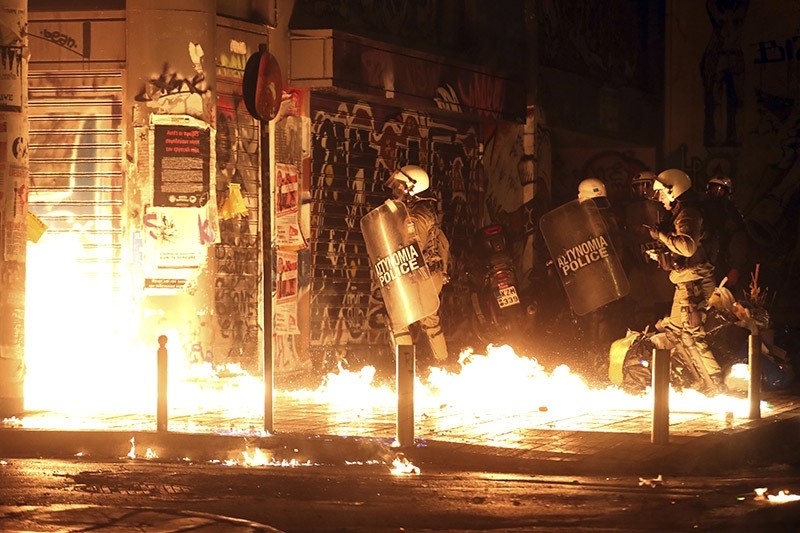 Police officers walk past flames from a fire bomb thrown by demonstrators during a protest against the visit of US President Barack Obama in Athens on Nov. 15, 2016. (AP Photo)
by Associated Press Nov 16, 2016 12:00 am

Greek riot police used tear gas and stun grenades in central Athens Tuesday to disperse about 3,000 left-wing marchers protesting a visit by President Barack Obama, after they tried to enter an area declared off-limits to demonstrators.

No injuries or arrests were reported.

The violence broke out as youths in motorcycle helmets and gas masks, armed with wooden clubs and petrol bombs, tried to break a police cordon in front of a barrier formed by police buses. Rioters retired to the Athens Polytechnic university complex in the city center, site of a 1973 student uprising, and engaged in running street fights with police.

Left-wing and anarchist groups who organized the protest had originally planned to reach the U.S. embassy in another part of town.

But authorities banned demonstrations in a large swath of the city center, to ensure that protesters came nowhere near Obama, who was attending a formal dinner at the residence of Greek President Procopis Pavlopoulos.

About 5,000 Communist party supporters took part in a separate, peaceful protest in central Athens, which did not challenge the police cordon, and about 1,000 people took part in a similar protest in Greece's second city, Thessaloniki.

Greek authorities have deployed more than 5,000 police for Obama's visit. The riot squad was on high alert for violence after an armed anarchist group called for "attacks and clashes" to disrupt the visit and leftist militants injured a police guard outside the French embassy with a hand grenade.

There is a strong anti-American tradition among Greek left-wingers, who still resent U.S. support for Greece's 1967-74 military dictatorship.

The small Popular Unity party, which took part in the main protest, described Obama's visit as "a provocation, much more as it comes during the commemoration of the heroic Polytechnic revolt, where the U.S.-driven dictatorship squashed the students with tanks."

"American imperialism has not changed," Lafazanis said Tuesday. "The U.S. presidents and administrations have played — and still play — a leading part in the bailout-linked plundering of our country ... and their interventions are drowning our part of the world in blood and creating refugee waves."

The last visit to Greece by a U.S. president was by Bill Clinton in 1999 — also very close to the Nov. 17 Polytechnic commemorations. It was marred by extensive street fighting between anarchists and riot police.