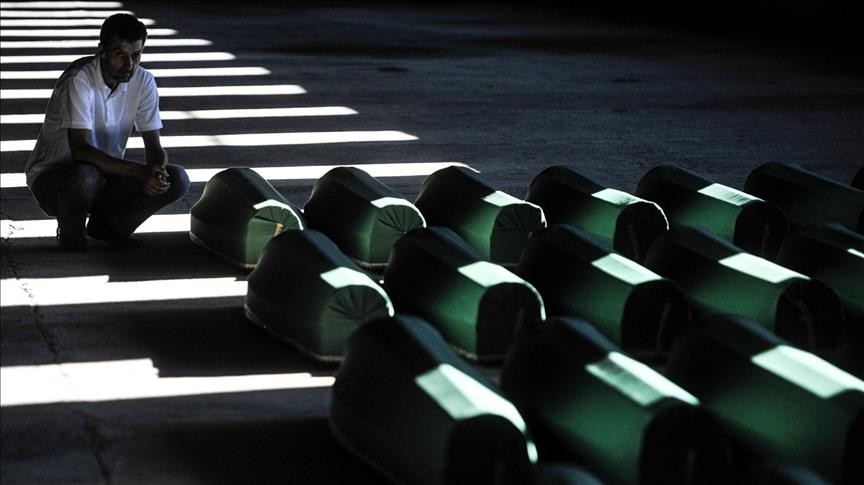 A relative one of one of the 127 victims who died during the Srebrenica Massacre mourns at Potocari Memorial Center in Potocari, Bosnia and Herzegovina on July 10, 2016. (AA Photo)
by Anadolu Agency May 19, 2017 12:00 am

The Serbian soldiers sentenced to total of 32 years on charges of massacre, torture, and rape

Three former Serb soldiers have been sentenced to a total of 32 years in prison for "war crimes against civilians" in northwestern Sanski Most during the war between 1992 and 1995.

Bosnian High Court on Friday found three of four suspects guilty on charges of war crimes such as massacre against Bosniak civilians, torture, and rape in and around Sanski Most city, as members of ethnic Serb Army of Republika Srpska.

Goran Mrdja was sentenced to 14 years in prison, while the other defendants -- Mile Kokot and Milorad Mrdja to 10 and 8 years respectively. The other defendant, Ranko Mrdja, was found innocent.

Almaz Ceric, daughter of one of the victims, said that Milo Kokot was sentenced to ten years.

"He killed him (her father) in front of me, it happened before my eyes," said Ceric.

Prosecution during the trial called on more than 30 witnesses and presented material evidence to prove that Goran, Milorad and Ranko, as well as Mile participated in crimes committed against Bosniaks, including murder, rape, beatings, looting and other psychological and physical abuse.