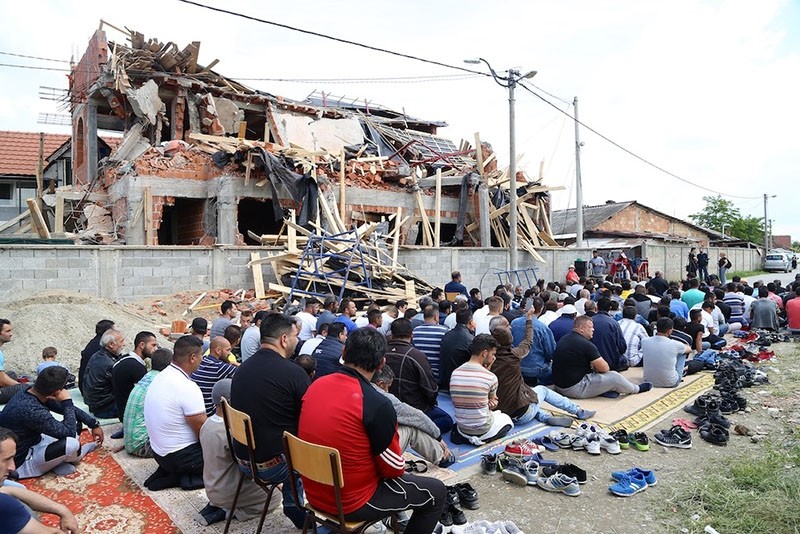 Local authorities demolished an illegal mosque on the outskirts of Belgrade after Serbian police secured the area in a pre-dawn action on Friday, ahead of the Muslim holy month of Ramadan, despite protests by local Muslims and the Islamic clergy.

The construction of a two-story Islamic temple without a minaret in the Zemun Polje neighborhood started in 2014 even though the authorities had refused to grant it a construction permit.

On Thursday, the authorities attempted the demolition of the building but withdrew after protests by Muslims from the neighborhood, mainly members of the Roma (Gypsy) minority. Early on Friday, they returned with the police escort and tore down much of building.

"We are unpleasantly surprised as this happened on the eve of the holy month of Ramadan," Jusufspahic told Reuters.

Meanwhile, more than 100 Muslims observed Friday prayer in front of the demolished building, with police watching them nearby.

Imam Emin Zejnullahu told Anadolu Agency that he arrived to the street where the demolition had taken place early in the morning, but that police officers would not allow him to pass. He claimed that a police officer pushed him and made him fall on the ground, and later threatened him.

Zejnullahu stated that they would wait for the response from governments in the region to see whether they would side with religious freedom and human rights. He added that they would not protest the demolition and would continue to hold prayers until the state agreed to help their community.

The Islamic Union of Serbia, affiliated with Turkey's Presidency of Religious Affairs (also known as Diyanet), also condemned the demolition, which took place deliberately, as if to "celebrate" the start of Ramadan for Serbian Muslims, especially those living in Belgrade's and Zemun neighborhood.

In the Serbian capital of around 1.6 million, there are about 20,000 practicing Muslims and only one mosque, which was built in 1575 when the Balkans was ruled by Ottoman Turks.

"We have asked people to remain calm," he said. "The authorities flexed muscles on the poor ... other religious communities are building their places of worship unimpeded," he said.

Jusufspahic said the Belgrade authorities have not issued a single construction permit to the Islamic community over the past five decades. His claim could not be verified.

Serbia is home to around 230,000 Muslims or 3.1 percent of the total population, mostly concentrated in the southwestern Sandzak region that borders Bosnia, Kosovo and Montenegro. A majority of country's population are Serbs who are predominantly Orthodox Christians.

The Balkan country is a candidate for the European Union membership, but before it joins the bloc it must improve the rule of law and the rights of religious and ethnic minorities.