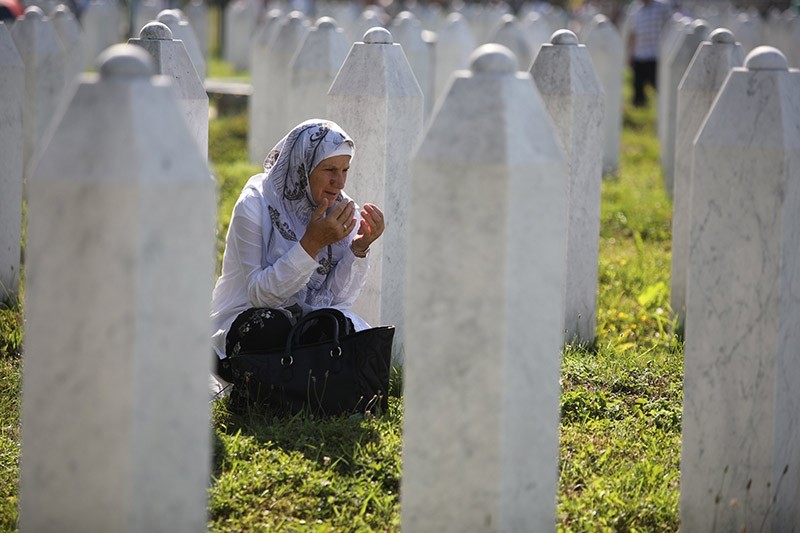 An elderly woman prays between gravestones on the Potocari Memorial Center in Srebrenica, Bosnia and Herzegovina, 11 July 2017. (EPA Photo)
by Daily Sabah with AP Jul 13, 2017 12:00 am

The court in Belgrade said it has accepted defense complains that the indictment against the eight is invalid because it was filed when Serbia did not appoint the chief war crimes prosecutor.

The ruling meant that the whole proceeding will have to start over from scratch.

The eight former members of a Bosnian Serb special police unit went on trial in February this year, accused of organising and participating in the shooting of more than 1,300 Bosniak civilians in an agricultural warehouse in the village of Kravica near Srebrenica in July 1995.

The trial that started in December was the first time that a Serbian court has dealt with the killings by Bosnian Serb troops of Muslim men and boys in the Bosnian town of Srebrenica.

The trial was seen as a test of Serbia's pledge to deal with its wartime past.

On July 11, 1995 more than 8,000 Bosnians were slaughtered by Serbian troops under the command of General Ratko Mladić. It was Europe's worst single atrocity since World War II.

The International Court of Justice recognized the massacre in Srebrenica as a genocide in 2007.