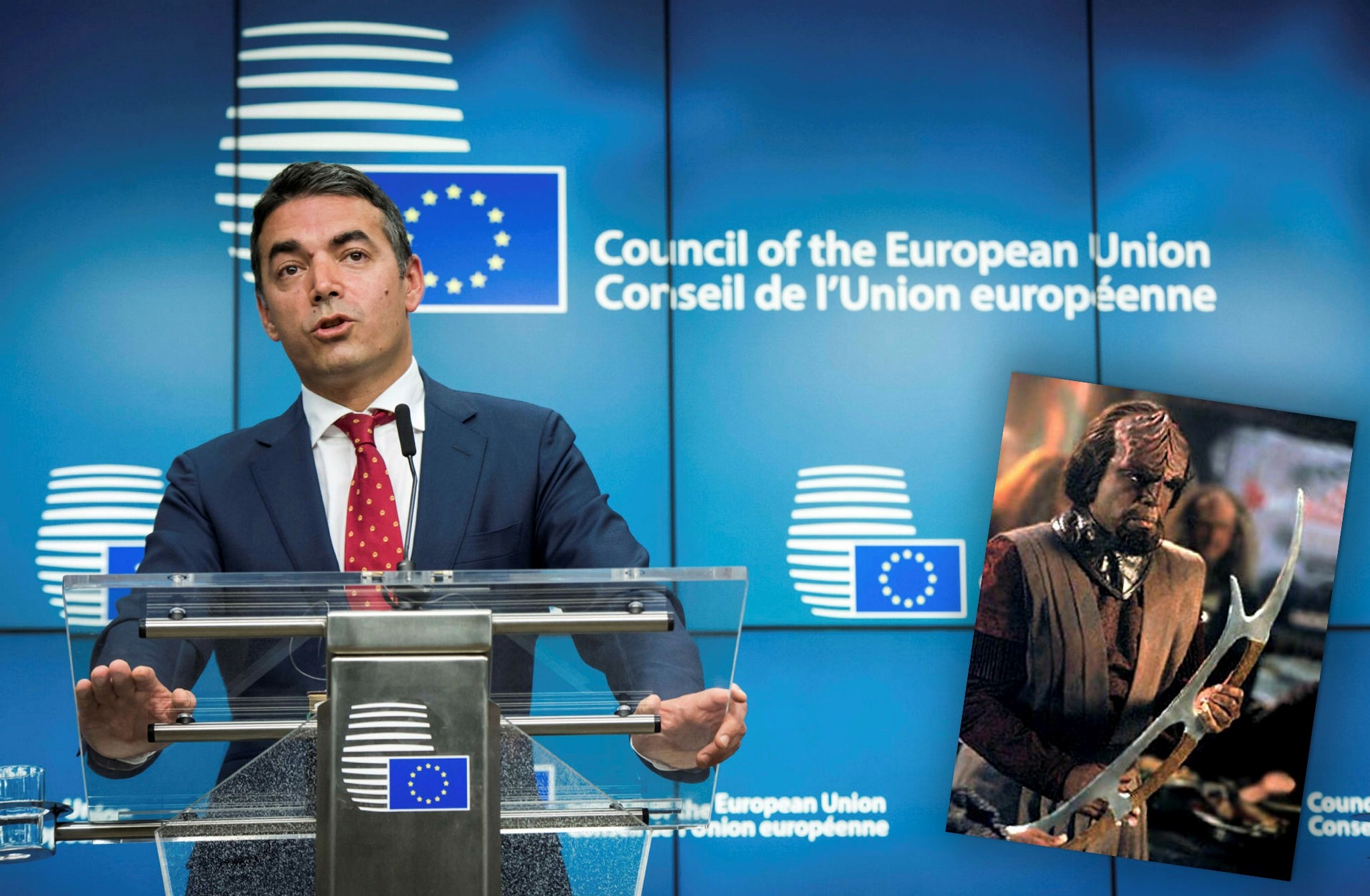 Macedonian FM Nikola Dimitrov gestures during a press conference after a EU-Macedonia Stabilisation and Association Council in Brussels on July 18, 2017. (AFP Photo) A member of the fictional Klingon species is depicted in the bottom right corner.
by Daily Sabah with AFP Jul 20, 2017 12:00 am

Speaking during a news conference in Brussels on Thursday, Dimitrov said that Former Yugoslav Republic of Macedonia, abbreviated as 'FYROM,' sounds like the name of the fictional race.

Athens, Brussels and the United Nations all refer to the Balkan country as FYROM, with Greece insisting that the name Macedonia should only be used for its own northern province.

"When you say FYROM, that has as much reference to my country as 'Klingon' from the Star Trek TV series," Dimitrov said.

The Klingons are a fictional human-like species with bumpy heads who run their own extraterrestrial empire in the American production.

Their language initially appeared as a few words at the end of the first Star Trek movie but has since become a full-blown fan cult, spawning an opera and Klingon translations of the Bible and Shakespeare's "Hamlet".

Despite his out-of-this world name comparison, the Macedonian minister hinted that another form of compromise was possible with Greece.

"I really believe we cannot resolve if one of the two parties will be quote unquote 'defeated,'" Dimitrov said alongside the EU's foreign policy chief Federica Mogherini and neighbourhood commissioner Johannes Hahn.

"We have to find a way where both countries will go forward with straight heads. I think that's possible.... We need to do the right steps carefully and at the right time."

Macedonia's new prime minister Zoran Zaev suggested last month in Brussels that his country could join NATO and the EU under a provisional name in a bid to end the row.

"With the new government in place ready to actively engage in implementation of overdue reforms, there is a real opportunity to move the country forward on its European Union integration path," Mogherini said.

The name issue came to the fore after Macedonia gained independence in the 1990s following the bloody collapse of Yugoslavia.

Greece claims a historical right to the term because the heart of Alexander the Great's ancient kingdom lies in its northern province of Macedonia.

It has vetoed Skopje's attempts to join NATO since 2008 because of the row.