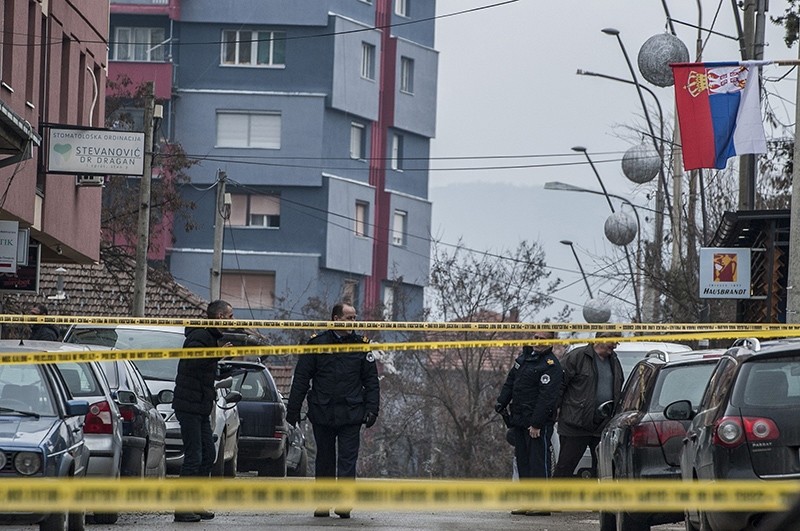 Kosovo police officers and forensics walk past the scene where the leading Kosovo Serb politician Oliver Ivanovic was killed in a brazen drive-by shooting in Mitrovica, Kosovo, Jan. 16, 2018. (AFP Photo)
by Compiled from Wire Services Jan 16, 2018 12:00 am

A leading Serb politician in northern Kosovo was shot and killed Tuesday morning, raising ethnic tensions in the region and halting EU-mediated talks between Kosovo and Serbia on the day they were due to resume.

Assailants opened fire on Oliver Ivanovic close to the offices of his political party in the Serb-controlled northern city of Mitrovica. He was taken to a hospital but doctors were unable to save him.

The doctors said that Ivanovic received at least five gunshot wounds to his upper torso. The assailants escaped in a car that was later found burned out. Kosovo police sealed off the area of the shooting and were looking for the attackers.

The Serb delegation at EU talks due to start in Brussels Tuesday immediately left to return to Belgrade.

The Serbian government official in charge of Kosovo and the country's delegation leader, Marko Djuric, described the murder as a "a criminal, terrorist act against the entire Serbian people."

Djuric said that "whoever is behind this attack ... whether they are Serb, Albanian or any other criminals, they must be punished."

Ivanovic, 64, was one of the key politicians in Serb-dominated northern Kosovo, a former Serbian province where tensions remain high a decade after it declared independence. Serbia does not recognize the independence of its former province and the killing is likely to raise tensions between ethnic Albanians and minority Serbs in the region.

In Belgrade, Serbian President Aleksandar Vucic called a top state security meeting to discuss the shooting, and was later due to address the public.

In Pristina, the Kosovo government strongly denounced the slaying and said it considers it to be a challenge to "the rule of law and efforts to establish the rule of law in the whole of Kosovo territory."

Kosovo President Hashim Thaci has strongly denounced the killing of a Serb political leader in the northern city of Mitrovica.

In a reaction on his Facebook page Thaci called on law enforcement authorities "to throw light as soon as possible on the circumstances of the death so that the perpetrators are brought to justice."

He also urged citizens in the north to cooperate with police.

Reacting on his Facebook page to Ivanovic's death, Haradinaj said that "exploiting this tragic act for daily political goals, even to block processes aiming at normalizing ties between two countries, is against the logic and spirit of cooperation."

"Kosovo remains committed to create a safe environment for all its citizens and is powerfully set in its Euro-Atlantic path," Haradinaj said.

He also insisted that Kosovo authorities will do their utmost to clarify the killing adding that they will "in no situation accept the logic of calculating criminal acts for political purposes by anyone."

A Kosovo court convicted Ivanovic of war crimes during the 1998-99 war. That verdict was overturned and a retrial was underway.

Ivanovic was considered a moderate opposition Serb politician. In July, his car was set on fire in Mitrovica, the Serb stronghold in northern Kosovo.

Some 40,000-50,000 ethnic Serbs live in northern Kosovo, rejecting integration with the mainly Albanian state since it declared independence from Serbia in 2008.

Relations between Serbia and Kosovo have been tense since 2008, but in 2013 both parties agreed to participate in the EU-sponsored negotiations on normalizing relations, a condition for both to progress on their way towards membership in the bloc.