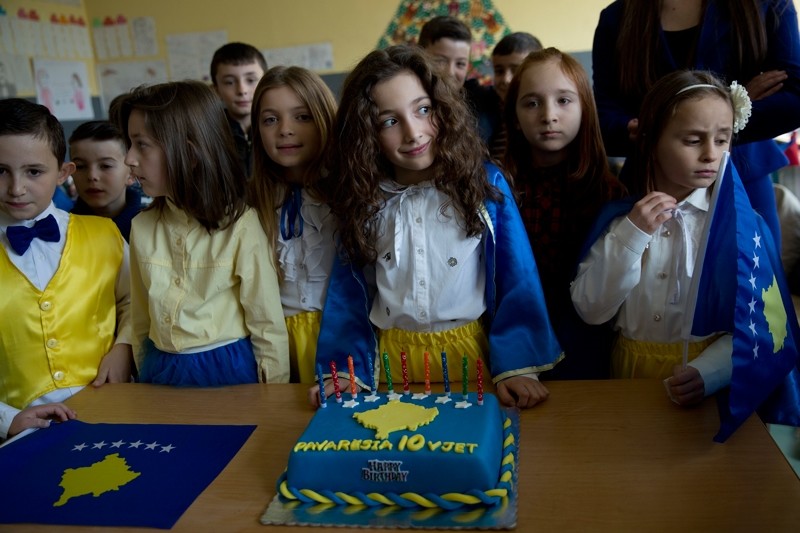 Pavaresia Sopi, 10, center, stands next to her birthday cake during an independence celebration ceremony at a school in the village of Sllovi near the town of Lipjan, Kosovo on Friday Feb. 16, 2018 (AP Photo)
by Associated Press Feb 16, 2018 12:00 am

All the students in a tiny village in Kosovo have gathered to celebrate a very special day for Pavaresia Sopi a 10th birthday with deep significance for her whole Balkan nation.

Pavaresia, whose name means "independence" in Albanian, was the first baby born in an independent Kosovo, 15 minutes after independence was declared at an afternoon session in parliament on Feb. 17, 2008.

The 4th-grade students celebrated Friday in Sllovi, 17 kilometers (11 miles) south of the capital, Pristina with a concert and other festivities. On the blue-yellow-and-white birthday cake the colors of Kosovo's flag they wrote: "Pavaresia 10 vjet! Happy Birthday!" 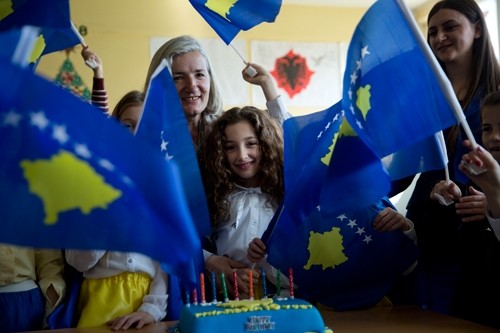 "I feel so happy that I have come to life at that important moment for Kosovo," said Pavaresia. "My advice would be to love each other because with love we may build a beautiful and great Kosovo."

Kosovo unilaterally declared independence from Serbia nine years after NATO's 78-day bombing in 1999 halted a Serb crackdown on ethnic Albanian separatists. It is recognized by 115 countries but not by Serbia.

On Saturday, it celebrates 10 years of independence facing real challenges ahead: establishing the rule of law, battling unemployment and working on reconciliation efforts with former foe Serbia.

Kosovo has signed an agreement with the European Union, the first step toward membership one day, and belongs to some 200 international organizations.

"We are hopeful that Kosovo will shine one day like Pavaresia," said her teacher Mimoza Kryeziu.