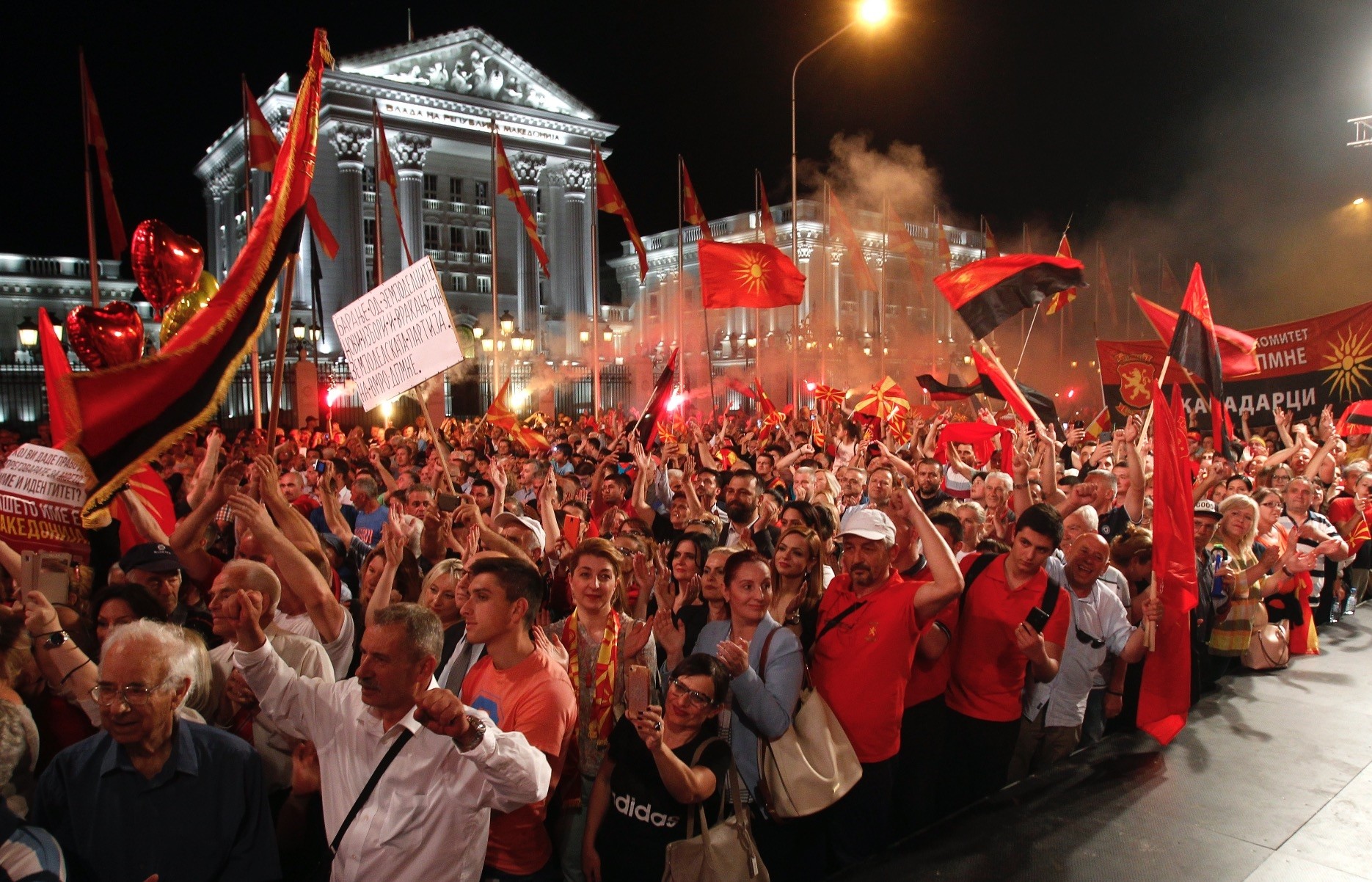 Supporters of the opposition VMRO-DPMNE party protest in front of a government building, Skopje, June 2.
by Compiled from Wire Services Jun 04, 2018 12:00 am

The nearly three-decade-old conflict between Athens and Skopje, regarding the name Macedonia, is seemingly reaching its final stages as leaders of both sides are reportedly nearing an agreement

Thousands of supporters of Macedonia's right-wing opposition VMRO-DPMNE party took to the streets of the capital Skopje on Saturday to protest against plans to change their country's name, which has been at the center of dispute with neighboring Greece.

Zoran Zaev, prime minister of the former Yugoslav republic, said Wednesday that negotiations with Athens to resolve the 27-year-old dispute were in "the final stages."

Athens objects to the neighboring state's constitutional name, Republic of Macedonia, because Greeks are protective over their own northern province of Macedonia – the cradle of the ancient Hellenic empire of Alexander the Great.

Greeks and Macedonians regularly engage in heated conversations both online and in real life regarding not only the disputed name, but also accusing each other of hijacking each other's history, with one side saying that modern Macedonians are Slavic, and therefore not related to Alexander the Great, and the other side claiming that modern Greeks are not Hellenic, and therefore do not have the right to claim the name or the ancient Basileus.

The contentious issue has stymied Macedonia's hopes of joining the European Union and NATO, as Greece can veto its membership bids.

The VMRO-DPMNE will not support any constitutional bid to change the name of the country, said Hristijan Mickoski, new leader of the opposition party.

"We are very clear on this subject," he added during the protest march.

Former prime minister and VMRO-DPMNE leader Nikola Gruevski, who governed Macedonia from 2006 to 2016, was absent from the rally after being sentenced on Wednesday to two years in jail by a Skopje court for abuse of power over the purchase of a luxury Mercedes.

Mickoski, said the protest was "the beginning of the end" for the current government and called for early elections to be held next March or April. He said a government of technicians should be formed to govern until the elections.

Prime Minister Zoran Zaev took power in May 2017 after 11 years of conservative rule amid a deep political crisis sparked by a wiretapping scandal in 2015.

Conservatives argue his government is incompetent, has devastated the economy, lowered wages and pensions and allowed corruption to flourish.

"A year of political terror, economic failures and the creation of a rotten society has passed. Young people are scattered all over the world because of disappointment," Mickoski said.

Interior Minister Oliver Spasovski, a senior official of the Social Democratic Union party, said that the left-wing government has spent its year in office working to rebuild Macedonia after 11 years of conservative rule.

"We are making fundamental changes in our country, changes that release the captured state, changes that bring justice and confidence to the institutions," Spasovski said. "With these changes, we corrected the decade of damage and trauma that was committed against the citizens, the nation and our Republic of Macedonia."

Hungary's firebrand nationalist Prime Minister Viktor Orban sent a video message of support in which he hailed the party's "wise and courageous leaders... who won't bend under pressure from foreign powers."

Protests are also being organized for next week in northern Greece, where some oppose what they see as a compromise solution being finalized between the Greek and Macedonian leaders.

The agreed new name will almost certainly contain "Macedonia," an outcome ardently opposed by many Greeks. Names in discussion have included "New Macedonia" and "Upper Macedonia."

According to a senior Macedonian official any name change agreed with Greece would have to be ratified by parliament and then put to a referendum. In light of Greece's objections, the country joined the United Nations in 1993 with the name of the Former Yugoslav Republic of Macedonia, or FYROM for short, after the breakup of Yugoslavia in the early 1990s. Dozens of countries, including the United States and Russia, have already recognized the country as Macedonia.