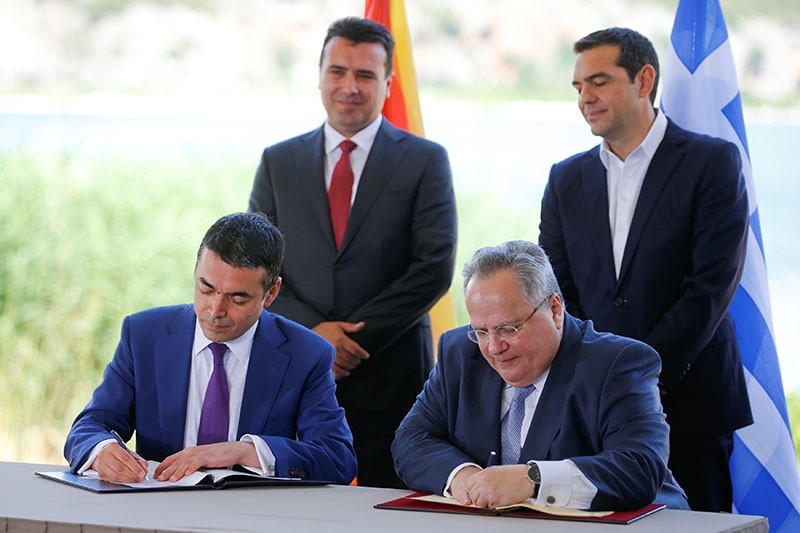 Greece and Macedonia signed a historic preliminary agreement to rename the small Balkan nation the Republic of North Macedonia, ending a row that has poisoned relations between the two neighbors since 1991

One of the world's longest -- and arguably most arcane -- diplomatic disputes could move a step closer to being resolved on Sunday when the foreign ministers of Greece and Macedonia sign a preliminary accord on the latter's name.

Ending a dispute that began 27 years ago, but the roots of which date back centuries, Greece's Nikos Kotzias and Nikola Dimitrov of Macedonia will meet at the Lake Prespa district to sign the historic accord, brokered after months of diplomatic haggling.

Joining them will be Prime Ministers Alexis Tsipras and Zoran Zaev, as well as officials from the United Nations and the European Union, who have welcomed the move.

The delegations will sign the agreement on the Greek side of the border before crossing over to the Macedonian side for lunch, Athens said.

Tsipras and Zaev last week beat the odds to announce a deal that will see the tiny Balkan state renamed as the Republic of North Macedonia.

Since 1991, Athens has objected to its neighbor being called Macedonia because it has its own northern province of the same name, which in ancient times was the cradle of Alexander the Great's empire -- a source of intense pride for modern-day Greeks.

The two premiers, both in their forties, have bucked strong reactions at home to push ahead with the agreement.

Tsipras has been accused of treachery by Greek hardliners, and on Saturday defeated a vote of censure against his government over the issue.

In Macedonia, President Gjorge Ivanov plans to exercise a one-time veto option to block the deal that the nationalist opposition has called a "capitulation".

Zaev, elected last year, has made a rapprochement with Greece a priority to secure his country's membership of the European Union and NATO, blocked by Athens for years.

The Macedonian parliament is scheduled to start debating the agreement next week.

Demonstrators from both countries plan to hold protest rallies near Prespa on Sunday.

The agreement still needs to be approved by Macedonia's parliament and pass a referendum. It also needs to be ratified by the Greek parliament, a process likely to take months.

Among Tsipras' staunchest critics is his predecessor, former conservative Prime Minister Antonis Samaras, who was foreign minister in 1991 when the dispute originally began.

"You have recognized an aberration which will not stabilize the area, it will undermine it," Samaras said Saturday.

"You are legalizing (Macedonian) irredentism," he said.

A deal that could backfire?

Tsipras' domestic critics say he has bargained away Greece's diplomatic advantages -- the power of veto over EU and NATO accession -- for a deal that could backfire.

Specifically, by officially recognizing a Macedonian language and nationality, it is almost certain that the country will be called Macedonia by the broader world, instead of North Macedonia, opponents of the deal argue.

Officials in Athens insist that the deal will help stabilize the historically volatile Balkan region, permitting Greece to focus on other regional challenges, Turkey among them.

They also note that Greece had already been criticized by the International Court of Justice for blocking Macedonia's membership of NATO.

In a 2011 ruling, the top UN court said Greece had "breached its obligation" under a provisional agreement reached in 1995 to end the dispute over the name of the former Yugoslav republic.

Skopje hopes to secure a date to begin European Union accession talks at an EU summit in late June and an invitation to join NATO in mid-July.