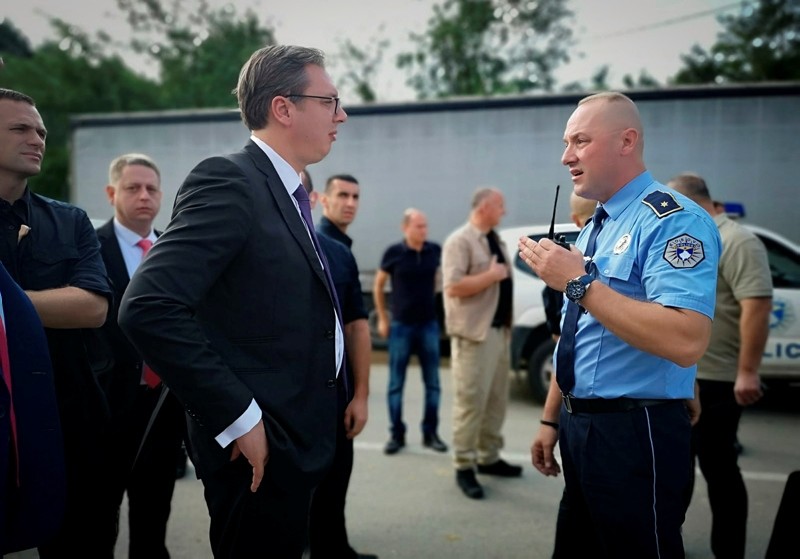 A Kosovo police officer speaks to Serbia's president Aleksandar Vucic, left, to say he cannot continue his trip to the village of Banje due to roadblocks, in Zubin Potok, Kosovo, Sunday, Sept. 9, 2018. (Serbian Presidency via AP)
by Compiled from Wire Services
Sep 09, 2018 12:00 am

Kosovo Albanians on Sunday blocked roads and burned tires on a planned route by Serbia's president in the former Serbian province, further fueling tensions between the two Balkan foes.

During his two-day trip, President Aleksandar Vucic planned to visit a Serb-populated village in central Kosovo on Sunday, but roads leading to the region were blocked by wooden logs, trucks and heavy machinery.

About 200 Kosovo war veterans blocked the road leading to Banje ahead of Vucic's planned visit.

Vucic and his entourage were later stopped by Kosovo police on the road to the Drenica region and were told they couldn't continue for security reasons.

"Vucic should apologize for crimes committed and massacres all over Kosovo," said one banner on the road to Serb-populated Banje. "Vucic will not pass," another read.

The Serbian president had told reporters in the morning that he will try to use a bypass road to visit the village.

Kosovo Prime Minister Ramush Haradinaj wrote on his Facebook page that he has "cancelled the permission issued by the Foreign Affairs Ministry for Serb President's visit to the Drenica zone."

"Citizens' security is above all," he wrote.

Serbian media said gunfire could also be heard, but those reports couldn't be independently verified. Vucic wasn't under attack.

"I have never been fascinated by someone's hatred. But when someone is so mean, showing some symbols that they believe we get offended by, well they are very mistaken," said Vucic, a former ultranationalist. "Now, I am even more determined to preserve peace, but also to preserve Serb institutions and Serb people" in Kosovo.

The conflict ended with NATO intervention, which forced Serbia to pull out of Kosovo. Kosovo unilaterally declared independence in 2008 which Serbia doesn't recognize.

Stefanovic said that security in Kosovo has deteriorated and that gunshots have been reported to Vucic's security guards, "which is a signal that Serbs are not welcome."

Stefanovic said that NATO-led KFOR troops and Kosovo police are being tested to provide safe passage for Vucic.

Kosovo, which has a population of 1.8 million and is mainly ethnic Albanian, declared independence from Belgrade in 2008, almost a decade after NATO air strikes ousted Serbian forces and halted a crackdown on ethnic Albanians in a counter-insurgency.

It is now recognized by more than 100 nations but not by Serbia, Russia and five EU states.

A minority of Kosovo's remaining Serbians live in small enclaves in areas mainly populated by Albanians who account for more than 90 percent of the Kosovo population. The majority of Kosovo's Serbs live in northern areas bordering Serbia and do not recognize Pristina institutions.

Expectations of an agreement that would involve a land swap proposed by both Belgrade and Pristina dimmed after a face-to-face meeting between Vucic and his Kosovo counterpart, Hashim Thaci, was abruptly cancelled on Friday.

Vucic, who is Kosovo for a two-day visit, said Saturday that an agreement resolving his country's dispute with Kosovo will be difficult to achieve given European opposition to remaking borders in the Balkans region.

The land swap idea has drawn opposition based on concerns the exchange would produce demands for similar deals in the volatile region.

"I will do my best (to reach the agreement), but it is a long road full of thorns and problems ahead," Vucic told reporters during a visit to the Gazivoda Lake dam, control of which is a hot topic between Belgrade and Pristina.

Part of the artificial Gazivoda Lake -- key for supplying water to some Kosovo municipalities including parts of Pristina -- is located in Serbia, where the source of its water lies.

Belgrade and Pristina are at odds who should have control over the lake, most of which is located in the northern Kosovo region mainly populated by Serbs, and a hydroelectric power plant next to it.

"I don't think of Thaci as a friend or companion or good interlocutor and I am sure he has the same opinion about me. But we do need to talk and to try and reach the agreement," Vucic told reporters at the Gazivoda Lake in Kosovo.

Although some European Union and U.S. officials have said they are open to the proposal, Germany and many analysts have rejected it on the grounds that it would revive old hostilities in the Balkans that erupted during ethnic wars in the 1990s.

"It is not going to be easy to reach an (final) agreement," Vucic said. "I see no possibility to implement my ideas, you saw what Angela Merkel said, you saw what Kosovo Albanians have said."

During a visit to Macedonia on Saturday, Merkel repeated her position that borders in the Balkans should not change. The deal also faces resistance from Kosovo's ruling coalition and opposition.

Serbia and Kosovo must mend ties to advance toward European Union membership. The two sides have been engaged in EU-mediated negotiations.