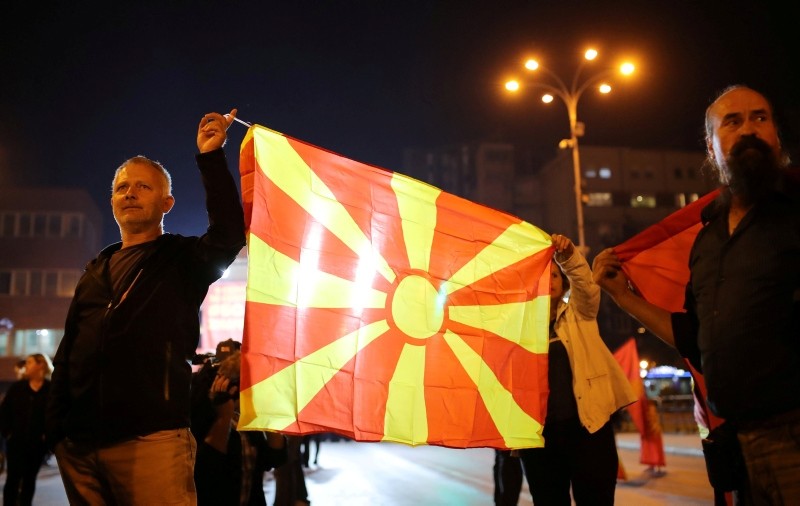 Protesters shout out slogans about boycott referendum on changing the country's name that would open the way for it to join NATO and the European Union in Skopje, Macedonia September 30, 2018. (Reuters Photo)
by French Press Agency - AFP
Oct 01, 2018 12:00 am

Moscow on Monday said low turnout in the referendum on Macedonia's name change renders it invalid, adding that lack of interest means that the population has boycotted a decision "forced" upon it.

"The turnout of 36.8 percent does not permit to call the vote successful and unequivocally shows that Macedonian voters preferred to boycott the decisions roughly forced upon Skopje and Athens," a statement by the Russian foreign ministry said.

It said European politicians had "participated in a propaganda campaign and meddled in domestic affairs of this Balkan country without shame".

Macedonia held a referendum on Sunday on a plan to rename the country to North Macedonia -- a move that would end a decades-long row with Greece, which promised in return to drop its objections to Macedonia joining the European Union and NATO.

While over 90 percent of those who voted supported the plan, which has an advisory status, only a third of the electorate showed up to vote.

Despite the low turnout, Prime Minister Zoran Zaev vowed to push ahead with the name change on Monday.

The Russian foreign ministry condemned the move: "There is a clear drive to ensure Skopje's entanglement in NATO despite the will of the Macedonian people."

Moscow is traditionally wary of NATO's enlargement in eastern Europe. The alliance's 1999 bombings of its ally Serbia caused a major rift in Russia's relations with the West at the time.