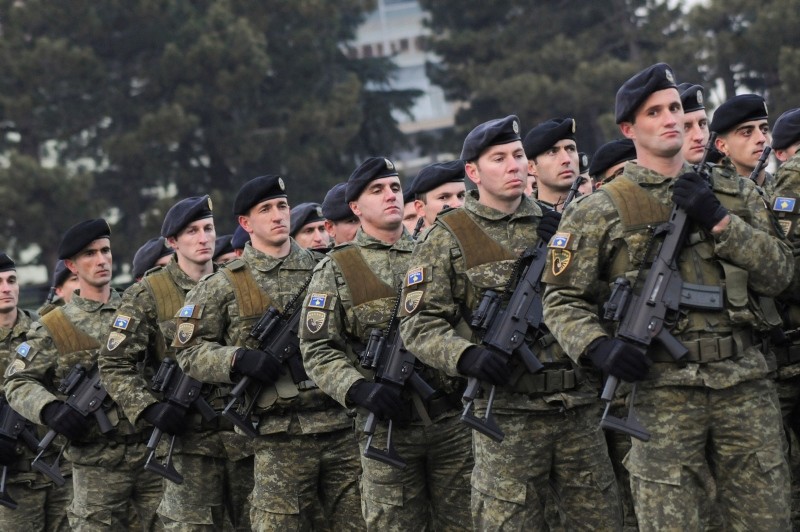 Members of Kosovo's security forces parade a day before parliament's vote on whether to form a national army in Pristina, Kosovo, Dec. 13, 2018. (Reuters Photo)
by Compiled from Wire Services Dec 14, 2018 12:00 am

Kosovo's parliament overwhelmingly approved the formation of an army, a move that has angered Serbia which says it would threaten peace in the war-scarred region.

All 107 lawmakers present in the 120-seat parliament on Friday voted in favor of passing three draft laws to turn the existing 4,000-strong Kosovo Security Force into a regular, lightly armed army.

"This vote today begins a new era for our country. From this moment we officially have the army of Kosovo," parliamentary speaker Kadri Veseli said as MPs hugged each other after the session, which was boycotted by minority Serb politicians.

The vote will delight many Kosovo Albanians, who are ready to celebrate the army as a new pillar of their independence, which was declared in 2008.

"Now we can say that we are a state, there is no a state without an army," Skender Arifi, a 37-year-old hairdresser in Pristina, told French Press Agency (AFP) ahead of the vote.

Speaking after the vote, Serbia's Prime Minister Ana Brnabic said the formation of an army in Kosovo goes against efforts at stability in the volatile Balkans.

"Serbia will try to continue on the path of peace and stability, the road of prosperity." Brnabic adds that "we should sit down and talk about building a better future," Brnabic said.

"Today is not the day that contributes to cooperation and stability in the region," she added.

Serbia doesn't recognize Kosovo's declaration of independence and has been fiercely opposed to the formation of the Kosovo army, saying it threatens the Serb minority.

Meanwhile, the United States hailed the vote to form a new army as a first step and reaffirmed "its support for the gradual transition ... to a force with a territorial defense mandate, as is Kosovo's sovereign right."

A U.S. Embassy statement in Pristina urged Kosovo to continue "close coordination with NATO allies and partners and to engage in outreach to minority communities."

The statement also said "regional stability requires that Kosovo make genuine efforts to normalize relations with its neighbor Serbia, and we encourage both sides to take immediate steps to lower tensions and create conditions for rapid progress on dialogue."

NATO chief Jens Stoltenberg warned that the alliance will "re-examine" its role in Kosovo.

NATO-led peacekeeping forces have guarded Kosovo since it broke away from Serbia in a bloody war in 1998-99.