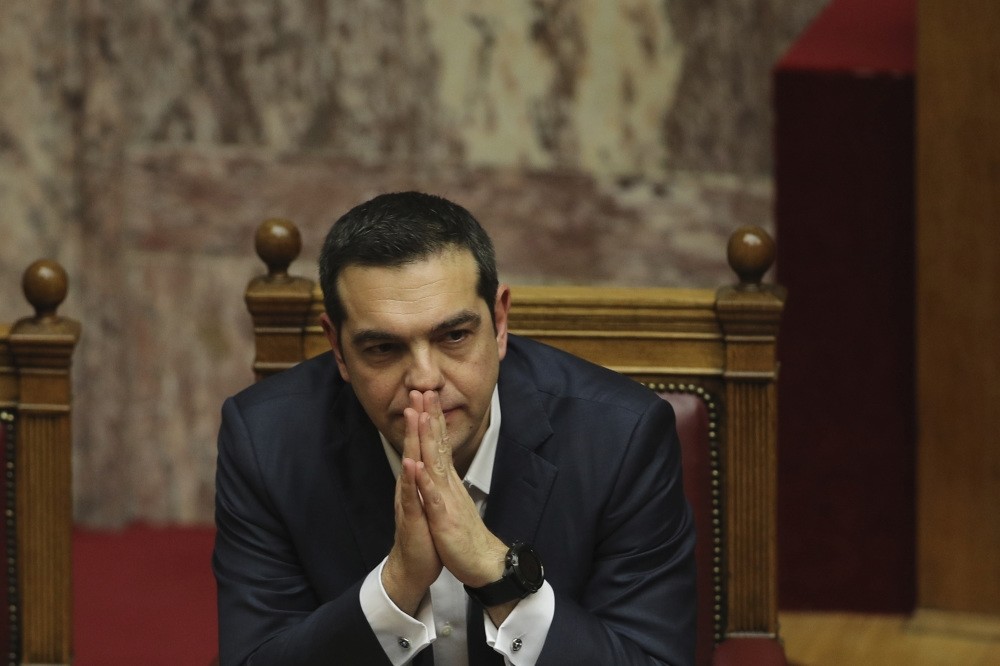 The Tsipras government retained its right to stay in power until the October elections after the confidence vote. However, the ratification of the Prespa Agreement by the Greek Parliament is the next challenge

Greek Prime Minister Alexis Tsipras held his government together late Wednesday, despite a critical confidence vote held in parliament, triggered by the sudden resignation of one of his coalition members and Defense Minister Panos Kammenos, who left in protest of the proposed name change of the former Yugoslav Republic of Macedonia to the Republic of Northern Macedonia.

The Prespa Agreement, which has been signed by both Tsipras and the Prime Minister of the Republic of Macedonia, Zoran Zaev, passed through the Skopje Parliament and now also has to pass through the Greek Parliament to be ratified, and it is expected to be the next challenge ahead for Tsipras.

In what some would call a surprising turn of events, the government got 151 votes of confidence out of 300 and retains its right to stay in power until October of this year; there are talks, however, that Tsipras would instead trigger the elections earlier, in late May, to coordinate them with the upcoming European Parliament elections.

In 2015, Tsipras' Syriza won the election but only got 145 seats out of 300, needing 151 to form a government, therefore, and due to the turbulence in Greek politics at the time, he had no choice but to form a coalition with the relatively new right-wing party, which had only won 7 seats; it did, however, propel his coalition to 152 seats.

Kammenos and his Independent Greeks (ANEL) party are ideologically aligned to the right, while Tsipras' Syriza is left wing.

Four ANEL members of parliament gave a vote of confidence to the prime minister, while the remaining two votes came from a member of parliament of the To Potami (The River) party, Spiros Danelis, and the final one from an independent member of parliament, Katerina Papakosta, who also serves as deputy minister of citizen protection and public order, thus allowing the government to reach 151 votes.

After hours of speeches from the heads of parties in parliament, Tsipras argued that accepting the name change would be followed by increased stability in the region, as it would allow Greece to finally lift its long-standing veto on Skopje entering both the European Union and NATO.

Athens had long been pressured by both the European Union and the United States to lift its veto on Skopje; however, for years on end it would not budge. As the name change deal will be presented to parliament in coming weeks, there's a good chance that it will be accepted and that Skopje will be finally inducted in the two international bodies.

The dispute has now been going on for 27 years, and Tsipras is the first Greek prime minister since the fall of Yugoslavia to make an effort to find a solution for the matter, despite widespread backlash from both parliament and the people. While official polling has not been conducted, it is speculated that more than half of Greeks are against the name change, seeing it as a sort of betrayal to their cultural heritage.

Protests against the name change in fact have been a common sight both in Athens, Thessaloniki and Vergina, the former capital of Alexander the Great's Macedonian Empire. Ever since gaining independence, Skopje has long-claimed that Alexander's Macedonia is part of their culture, which sparked the decades-long dispute in the first place.

These regions used to be under the rule of Alexander in ancient times, including parts of modern day Albania, Serbia, Kosovo and Bulgaria. Different administrations that enacted their power over the region through the centuries laid down the regional Macedonian borders approximately along the same lines; they include the Roman Empire, the Eastern Roman/Byzantine Empire and the Ottoman Empire.

Ethnological arguments have also played a major role in the debate, with one side claiming that Greeks had little to nothing to do with Macedonia and the other saying that Skopjans are Slavs who never spoke Greek and therefore have no real connection to Alexander or his achievements.

Hardliners in both countries protest that the Prespa deal granted too much to the opposing side; however, Greek government officials remain optimistic that it will pass through parliament despite opposition.

The protests have sometimes gotten out of hand, with posters appearing displaying pictures of lawmakers with the caption: "Will you betray Macedonia?" Four were arrested for breaching advertising laws and traffic codes in the northern towns of Grevena and Kozani and further protests are being planned for Athens this coming Sunday.

Despite a certain degree of upheaval and unpopularity when it comes to the Prespa name-change agreement, Prime Minister Tsipras lived to conduct politics another day, and whether the deal will get through parliament remains to be seen.