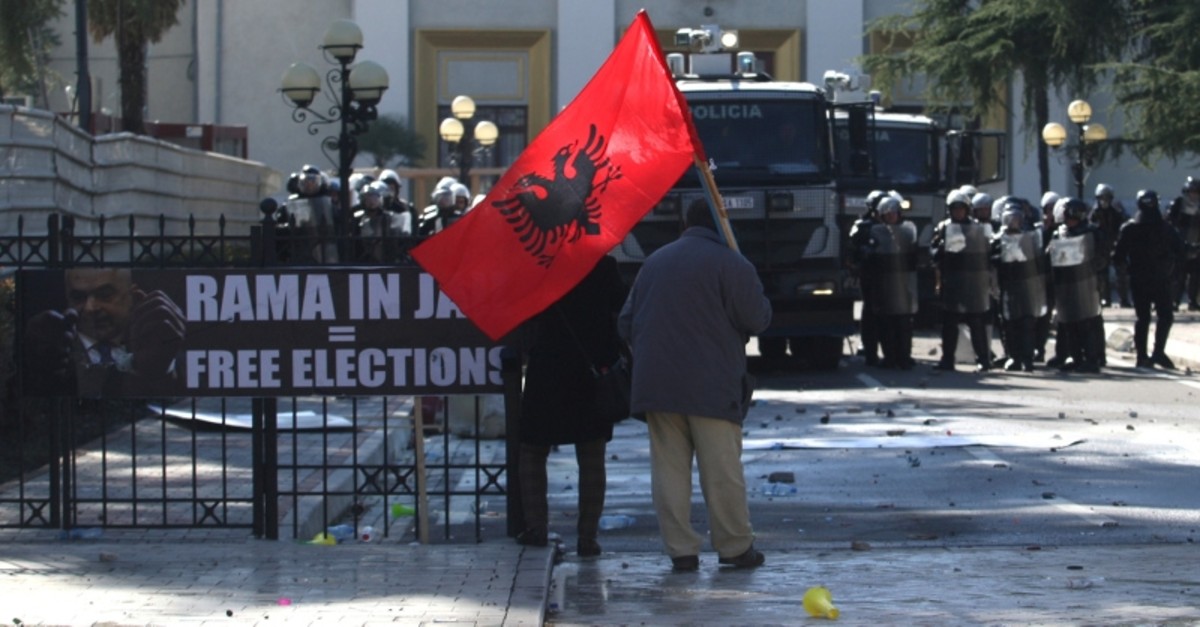 A supporter of the opposition party attends an anti-government protest in front of the Parliament in Tirana, Albania. (Reuters Photo)
by Associated Press Mar 16, 2019 12:00 am

Albanian opposition supporters clashed with police while trying to storm the parliament building Saturday in a protest against the government which they accuse of being corrupt and linked to organized crime.

Thousands of supporters of the center-right Democratic Party-led opposition first gathered on the capital's main boulevard in front of Socialist Prime Minister Edi Rama's office to demand his resignation.

Protesters, led by Democratic leader Lulzim Basha, then walked to the parliament building and tried to break through police lines while throwing smoke bombs and other objects at officers.

Police dispersed them with tear gas and water cannons. A few protesters were injured and helped by others around them.

The opposition, whose lawmakers have relinquished their seats in parliament, declines to dialogue with Rama, asking for a transitory Cabinet without him to prepare early elections.

Earlier, threw smoke bombs and flares behind the police lines outside the prime minister's office, and many shouted "Rama go!"

"We have no alternative but to protest until we bring back democracy and rule of law," Basha told The Associated Press in an interview before the start of the rally.

After about 40 minutes outside parliament entrance, the opposition leader led all the people toward his headquarters, pledging to keep on with daily protests "in every city, quarter, street, home, village."

"There is no other way to take democracy back other than mass protests," he said.

President Ilir Meta, who is on a visit in Azerbaijan, called on the opposition to protest "peacefully."

The governing Socialists have 74 seats in the 140-seat parliament. Some vacant seats in the parliament have been taken by opposition candidates. Opposition parties blame the Socialists for "buying" those people, an accusation the government denies.

The U.S. and European Union have warned the opposition against using or inciting violence and to sit down for talks.

Basha sent a message to the international community too.

"My invitation to all of them is to listen less to the corrupt autocrat like Edi Rama ... Listen to the people's voice," he said.

Albania hopes to get the EU's approval in June on launching membership negotiations.