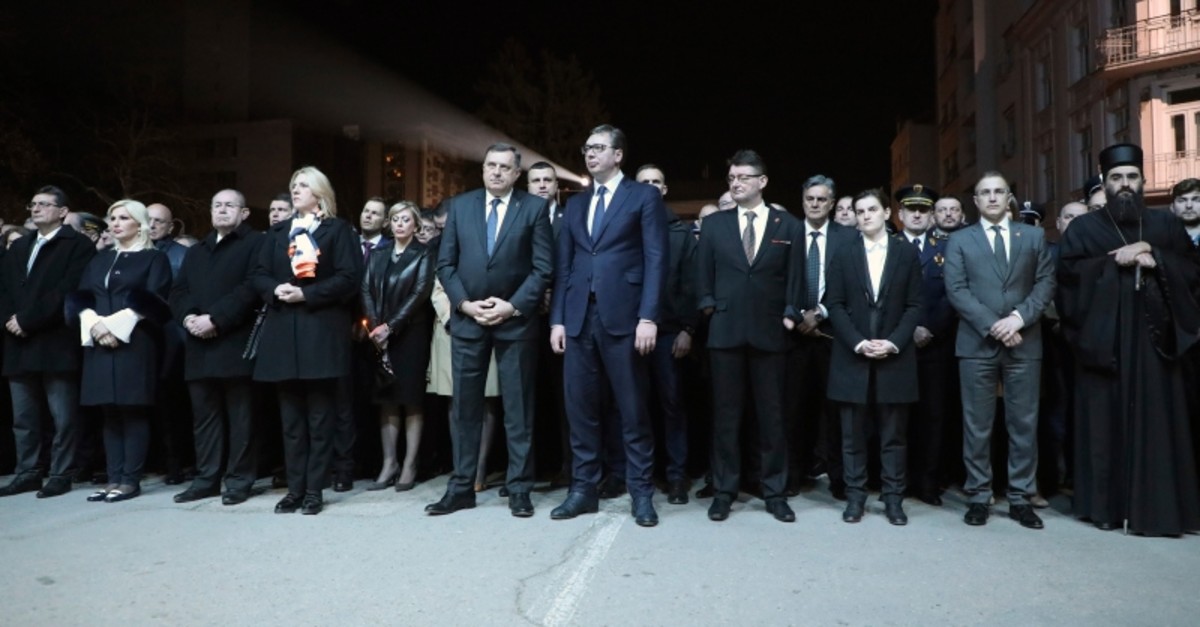 In this photo provided by the Serbian gov't, President Aleksandar Vucic, centre, along with other dignitaries, attend a remembrance ceremony to mark the twentieth anniversary of the 1999 NATO intervention, in Nis, Serbia, Sunday, March 24, 2019.
by Compiled from Wire Services Mar 25, 2019 3:00 pm

NATO committed a crime when it bombed Serbia and the country will never join the alliance, President Aleksandar Vucic said Sunday on the 20th anniversary of NATO intervening against Yugoslavia to stop the bloodshed in Kosovo.

"The death of 2,500 civilians, of 79 children, the devastation of the country, damage running into tens of billions of dollars, it will always be a crime for us," he said at a ceremony held in Nis, 250 kilometers south of Belgrade.

NATO bombed Serbia and its then Yugoslav sister republic Montenegro for 78 days from March 24, 1999, over Belgrade's indiscriminate and heavy-handed response to an Albanian insurgency in Kosovo.

The late Serbian leader Slobodan Milosevic eventually capitulated and ordered the armed forces to retreat from what was then a Serbian province. The intervention and the ousting of Serbian forces paved the way for Kosovo's declaration of independence in 2008.

The head of the Serbian Orthodox Church, Patriarch Irinej, accused western leaders of plotting the "destruction and dismembering" of Serbia.

"They did us evil, devastated our factories, industries, roads and even hospitals," Irinej said. "It is something that only makes the devil happy."

Kosovo Albanian leaders also marked the anniversary, but as a positive event.

President Hashim Thaci, who was the political representative of the ethnic Albanian rebels, described the day when the bombing of the Serbian foes began as "great and glorious."

Prime Minister Ramush Haradinaj, a former rebel commander, said "that day 20 years ago marked a turnaround. Our people looked to the sky during the intervention, saying 'there is god.'

"We will forever be grateful to NATO and the United States," he added.

Kosovo has been recognized by most western powers and around 110 countries worldwide, but Serbia still claims sovereignty over it and is, with its fellow Orthodox superpower Russia, blocking it from joining the United Nations.

The two countries' ties remain tense though the European Union has urged them to normalize relations if they want to join the bloc. The talks have stalled.

Serbia does not recognize Kosovo's 2008 declaration of independence.

Yugoslavia's new Constitution in 1974 enabled the province to function at every administrative level independently of its host republic within Yugoslavia.

In the late 1980s Slobodan Milosevic -- then Serbia's president within Yugoslavia, before dying decades later in 2006 while on trial for war crimes -- effectively terminated the 1974 privileges, saying they were contrary to the interests of Serbs.

Milosevic's move drew criticism from the other Yugoslav republics.

In response, in 1990 the Kosovo Assembly voted to declare Kosovo an independent state.

The assembly's vote was recognized by Albania.

Later, conflicts between Serbian forces and the Kosovo Liberation Army (KLA), which was founded in 1991, played an important role in the country's move towards independence.

The conflict escalated into the Kosovo war, which lasted from February 1998 until June 1999.