Srebrenica, a source of unending pain for Bosnians 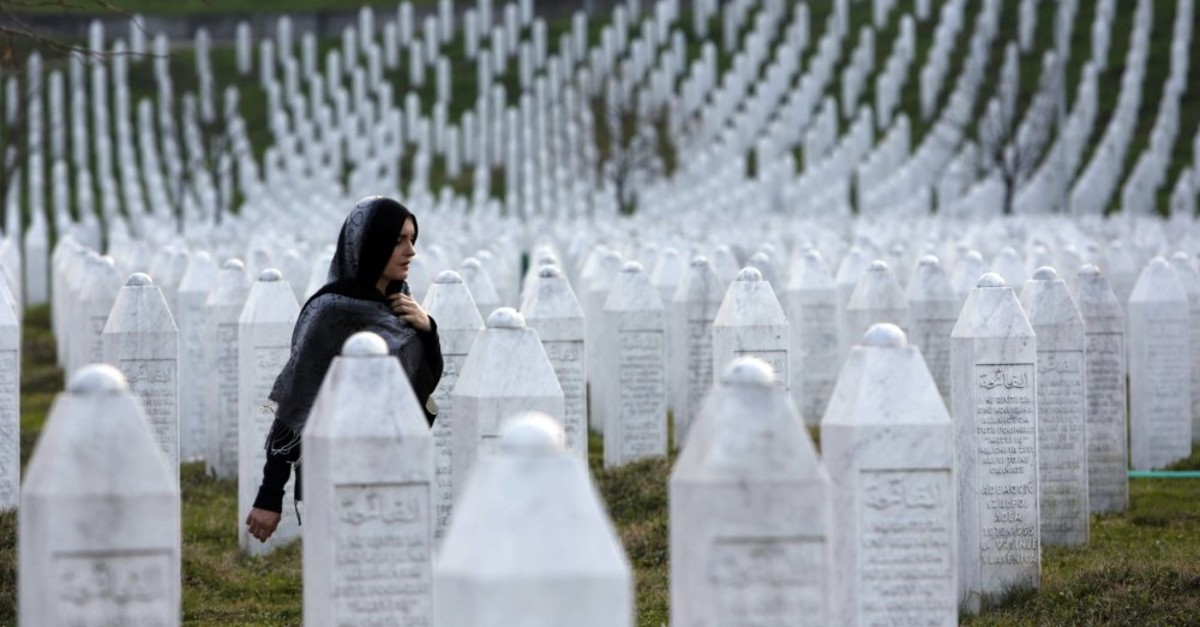 A Bosnian woman walks among gravestones at the genocide memorial center in Potocari near Srebrenica, March 26, 2019.
by Yusuf Selman İnanç Jul 11, 2019 12:10 am

Bosnians are marking the 24th anniversary of the unprecedented horror of the genocide in Srebrenica, caused by Serbian forces, which resulted in the deaths of thousands

Each year, news agencies publish similar reports: Srebrenica victims buried with a funeral in a small town in Bosnia. And similar photographs are taken by photographers: Women with white headscarves and men with white caps are praying and crying. The Srebrenica genocide happened 24 years ago, but the pain is experienced every year by Bosnians. This year, Bosnians – along with many others will mark the 24th anniversary of the genocide. Once again, prayers and sadness will intermingle at the cemeteries full of many unidentified bodies massacred during the genocide.

When the war in the Balkans started in 1992, the small town of Srebrenica was besieged by Serbian forces. The shortage of basic needs, including food and medicine, was a result of the siege. Bosnians, most of whom were unarmed and unlike the Serbians, disorganized, looked forward to receiving aid from the United Nations, Europe, the U.S. and Muslim countries. The trapped people tried their best to maintain their lives despite the lack of food, energy and water. However, they were generous enough to welcome refugees from the surrounding towns because Serbian forces had already overrun them. Bosnians were protected by U.N. Peace Mission soldiers. But this fragile protection ended in July 1995. Immediately after the U.N. soldiers pulled out, mass killings started. Resembling a concentration camp, the whole town was horrified when Serbian forces started entering the town.

The Serbian forces not only killed Bosnians but also tortured and raped them. Many survivors recall that Serbian paramilitary groups slowly killed people, then butchered them and scattered the pieces around. Therefore, some victims' body parts have not been found and put in graveyards.

Women were gathered in certain buildings and raped repeatedly. Some of the women were not killed intentionally so that they would give birth to children put into their wombs by Serbian soldiers.

During this genocide attempt, world powers confined themselves to watching these scenes of horror. After the Bosnians were butchered and subjected to unprecedented brutality, the international powers decided to intervene in the ongoing war and stop the Serbian forces.

After thousands were slaughtered, international powers decided to try the Serbian leaders and sentenced them to life in prison. Now, the Council of Europe is commemorating the genocide. It is important to note that the commemoration is happening with Turkey's help. Moreover, President Recep Tayyip Erdoğan is among the few leaders joining a procession to commemorate the genocide of thousands of innocents.

After the war ended, the pains of the Bosnians did not end since current political and administrative systems are quite fragile. Three presidents were elected to rule ethnic-based cantons; thus, the country faces the threat of disintegration. Moreover, the rise of the far-right and the discourse that opposes the recognition of the genocide pose new threats for Bosnians.