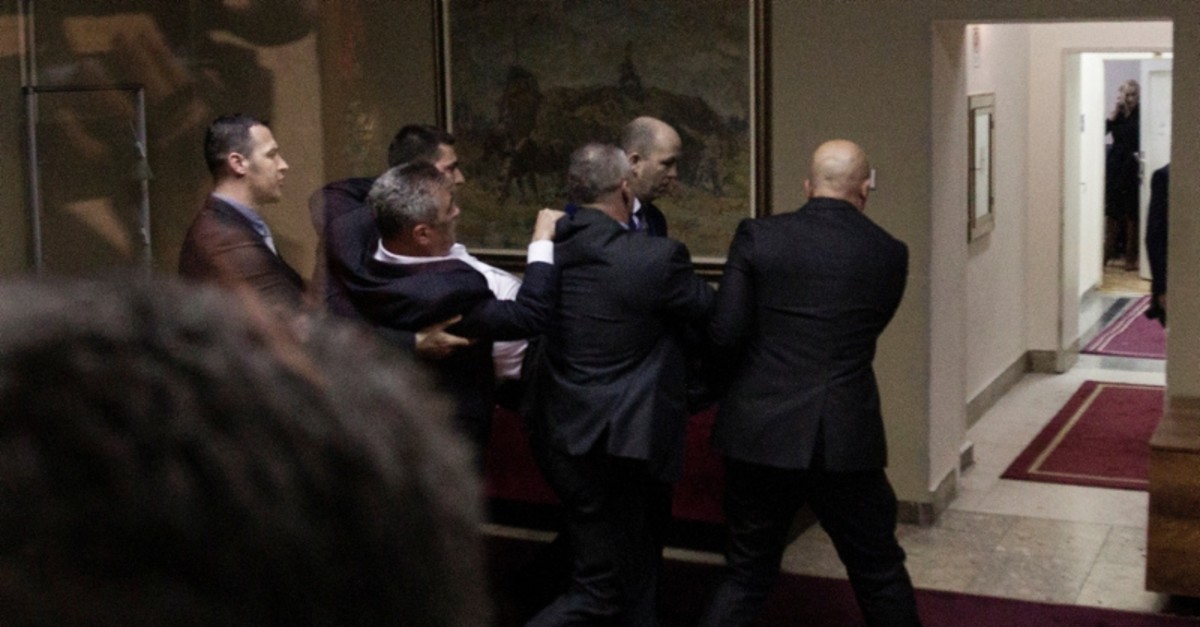 Police officers carry away opposition deputy Slaven Radunovic from the Democratic Front, after they tried to prevent the vote on a bill on religious freedoms & legal rights of religious organizations in Montenegro's parliament in Podgorica (Reuters)
by Dec 27, 2019 7:40 pm

Montenegro's opposition leaders were arrested Friday after a dramatic night in parliament when their deputies violently protested the passing of a controversial law on religious freedom.

The law has become a flashpoint for tensions between the government and the pro-Serb opposition which is close to the Serbian Orthodox Church (SPC), Montenegro's main religious body.

The Church is particularly incensed over a clause requiring religious communities to prove ownership of properties from before 1918, when Montenegro lost its independence and joined a Serb-led kingdom, in order to keep them.

During the tense parliamentary debate that started on Thursday and stretched into the night, opposition MPs from the Democratic Front threatened to stoke unrest if the law was passed.

When amendments they proposed were rejected, opposition members attempted to set off a firecracker in the parliament hall, destroy microphones and physically attack other politicians, according to an AFP reporter at the scene.

After the melee, however, the law was passed.

A total of 22 people including 17 MPs were initially detained and escorted out of the assembly, police said in a statement early Friday.

All but three were released Friday morning, with opposition leaders Milan Knezevic, Andrija Mandic and another MP held on accusations of "assaulting an official in the performance of his duties and preventing a policeman from carrying out his duties", police said.

The Serbian Orthodox Church, which runs hundreds of medieval monasteries and churches on tracts of valuable land throughout the tiny country, has accused the government of using the law to appropriate church heritage and purloin its assets.

The ruling party denies this, saying it only wants to sort out ownership rights.

Church authorities in Montenegro on Friday blamed the government for the incidents which it said caused "unimaginable divisions and hatred".

"Orthodox believers are now expecting one of the hardest Christmases in Montenegro's recent history," the church said of a holiday that most followers celebrate on January 7.

It added that police beat a priest and two supporters in northern Montenegro when they joined a protest over the law, which police denied as "untrue".

On Thursday, Orthodox priests took part in a demonstration against the legislation in the capital Podgorica, where a heavy police presence was deployed as the parliamentary debate began.

There were also attempts to block roads in other parts of the country by the opposition's supporters, local media reported.

In its statement, the Church accused Montenegro's President Milo Djukanovic of wielding the law as part of his effort to revive the country's independent Orthodox Church.

The Montenegrin Orthodox Church declared its separation from the Serbian one in the mid-1990s, but it is still not recognised by most major churches.

President Djukanovic has, however, openly called for the "renewal" of the Montenegrin church, setting off tensions with Belgrade and with pro-Serb opposition groups.

Montenegro was part of the former Yugoslavia as was Serbia for nearly 90 years until its independence in 2006, and relations between the neighbours remain complicated.