The Brooklyn Nets cool the Heat 96-95 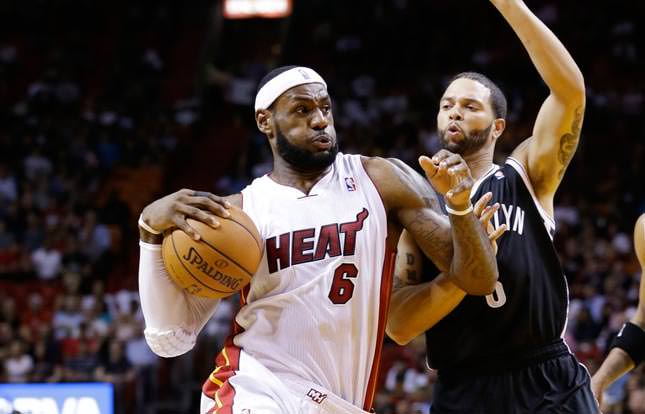 NEW YORK – The Nets (33-20) held on in a close finish. On the final possession, Miami's Chris Bosh tried an inbounds pass to LeBron James in the lane, but Nets guard Shaun Livingston deflected the ball to allow Brooklyn to get the game's final stop. The Heat (44-18) was led by forwards Bosh (24 points), guard Dwyane Wade (22 points) and LeBron James (19 points) but they fell two games behind the idle Indiana Pacers in the battle for the best record in the Eastern Conference.

Mike Conley scored all of his team-high 16 points in the second half, including a running one-hander in the lane with 1.5 seconds left, to lift the Memphis Grizzlies to a victory over the New Orleans Pelicans.

The Pelicans got 29 points and 10 rebounds from forward Anthony Davis, but he scored just seven in the second half.

Carmelo Anthony scored 34 points and grabbed nine rebounds as the short-handed New York Knicks continued their belated playoff push with a victory over the Boston Celtics.

Jeff Green scored 17 points in the third quarter and 19 of his 27 in the second half as the Celtics (22-43) lost their second straight and fell for the ninth time in 12 games.

Center Al Jefferson scored 26 points and grabbed 10 rebounds as the surging Charlotte Bobcats pulled away in the fourth quarter for a victory over the Washington Wizards.

Neither team led by more than six until Charlotte (31-34) took control with 11 straight points in the final period.

Guard John Wall scored 23 points for the Wizards, though none came in the fourth quarter.

Kenneth Faried scored 26 points and Wilson Chandler 21 in leading the Denver Nuggets to a victory over the Orlando Magic.

Reserve J.J Hickson had 20 points and nine rebounds in just 22 minutes, giving the Nuggets (28-36) a big spark early in the fourth period.

DeMar DeRozan led the way with a gamehigh 25 points as the Toronto Raptors defeated the Detroit Pistons.

Toronto (36-27) opened an 18-point lead to start the third thanks to a 13-2 run led by Kyle Lowry and never looked back. Lowy finished with 19 points.

With forward Blake Griffin leading the way again, the Los Angeles Clippers extended its winning streak to a season-high nine games with a victory over the Golden State Warriors.

Griffin finished with 30 points and 15 rebounds as Los Angeles (46-20) halted the Warriors' winning streak at five games. Griffin, who also had three steals and another highlight-reel dunk, scored at least 20 points for a careerbest 24th consecutive game.

Spurs guards Patty Mills had 15 points and Danny Green 14 as they helped San Antonio extend its win streak to eight with a win over the Portland Trail Blazers.

Trail Blazers big man LaMarcus Aldridge took a hard fall early in the third quarter while driving to the basket and landed on his back.

He suffered a back contusion and did not return.

Dirk Nowitzki scored 31 points and moved into 12th place on the NBA's all-time scoring list while lifting the Dallas Mavericks to a win over the Utah Jazz.

Nowitzki made a blistering 12 of 14 shots on the night, including a fade-away three-pointer with 1:54 remaining that all but clinched the win for Dallas (39-27).

Guard Goran Dragic scored 20 points and forward Marcus Morris added 18 points off the bench for the Suns (36-28) in their third straight loss.