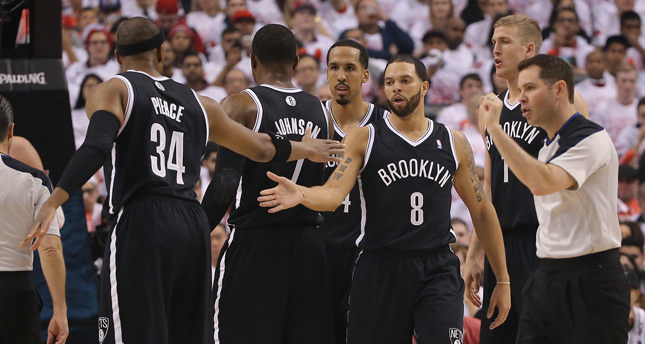 by Associated Press Apr 20, 2014 12:00 am
TORONTO — Deron Williams and Joe Johnson each scored 24 points, Paul Pierce scored nine of his 15 points in the final quarter and the Brooklyn Nets beat the Toronto Raptors in Game 1 of their first-round playoff series.

Shaun Livingston scored 10 points and Kevin Garnett had five as the Nets won despite making 4 of 24 3-pointers.

Kyle Lowry scored 22 points and Jonas Valanciunas had 17 points and 18 rebounds for the Raptors.

Valanciunas is the second Raptors player to have a double-double in his postseason debut. Tracy McGrady had 25 points and 10 rebounds against New York in his first playoff game in 2000. Valanciunas also set a Raptors record for playoff rebounds by surpassing Keon Clark, who had 16 against Detroit in 2002.