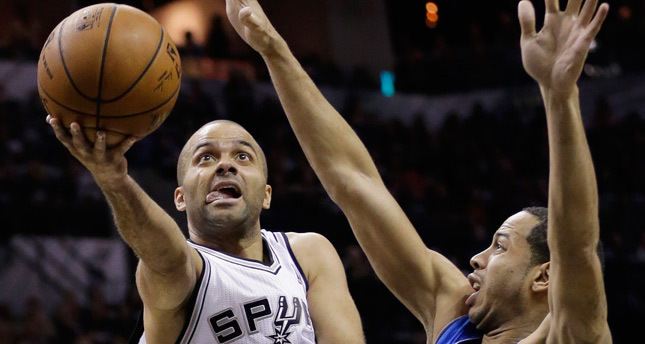 Duncan scored seven of his game-high 27 points in a late 15-0 fourth-quarter run and the top-seeded Spurs rallied for a 90-85 home-court win over the eighth-seeded Mavericks on Sunday in the opener of their Western Conference first-round series.

"It's great to get this first one in the books," said Duncan, the 37-year-old future Hall of Famer. "It's always tough to change gears from regular-season to the playoffs when you're preparing for a team and they're preparing for you."

With 3 minutes 41 seconds left in the third quarter, Duncan went to the bench for about six minutes after bumping knees with Mavs guard
Monta Ellis.

"I knew as soon as I felt it my leg just kind of went numb, it was like a charlie-horse," Duncan said. "I knew I needed a couple minutes
and I'd be just fine."

San Antonio trailed 81-71 with 7 minutes, 45 seconds remaining when Duncan sparked a 15-0 blitz, including Tony Parker's go-ahead layup
with 3:23 left and jumper as part of a 19-4 finishing kick.

"Timmy's the base from which everything else occurs, whether he's scoring or not," San Antonio Coach Gregg Popovich said. "It just gives us a comfort level and a point from which to operate.

"He plays defence, rebounds, scores here and there. He just does his job."

The Spurs also held the Mavs to 0-12 shooting before Devin Harris hit a meaningless layup just before the buzzer.

"We were trying to change the face of the game," Spurs Manu Ginobili said. "We starting making stops and got a couple of easy buckets.

"That changed our mentality and our energy. Nobody would have thought we'd make a 15-0 run but we kept playing."

Parker had 21 points while Ginobili added 17 for the Spurs, who have taken 10 straight against their Texas-rivals despite shooting just 3-of-28 from behind the arc.

"Give them credit they played great defence, they took away our 3's and we were struggling a little bit," Parker said. "Defensively, we did a good job in the fourth quarter.

Harris netted 19 points for Dallas but German superstar Dirk Nowitzki was held to 11 on a frosty 4-of-14 shooting.

Nowitzki was encouraged despite letting the opener slip away saying: "We have to execute a little better down the stretch but if we
compete the way we did tonight we should be in the game again."