Heat close in on series sweep against Bobcats 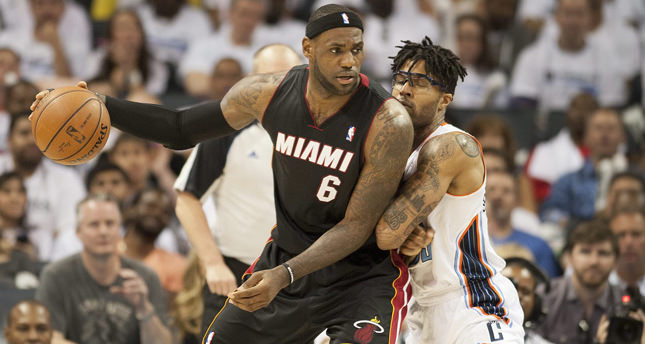 LeBron James scored 30 points, and the Miami Heat rolled over the Charlotte Bobcats 98-85 to take a 3-0 lead in their best-of-seven Eastern Conference first-round playoff series.

Charlotte made a late run to whittle the final margin down but never seriously threatened.

James, who scored a career-high 61 points in his last visit to Time Warner Cable Arena in March, was 10-for-18 from the field and nine of 10 from the line. He also had 10 rebounds and six assists.

The Heat also got 17 points from guard Dwyane Wade and 12 from forward Chris Andersen.

Al Jefferson led the Bobcats with 20, but scored only five in the final three quarters. Chris Douglas-Roberts scored 17, and Kemba Walker and Josh McRoberts scored 13 apiece.

The Bobcats led 27-23 after one quarter, thanks to Jefferson's 15 first-quarter points on seven of nine shooting, and they extended the lead to seven points early in the second before Miami took control.

Indiana could have folded under another barrage of three-pointers from the Atlanta Hawks but instead the Pacers answered and evened a series that has been much closer than many expected.

Paul George scored 24 points and George Hill had his best game of the series in a 91-88 victory over the Hawks at Philips Arena. The first-round playoff series is tied 2-2 and heads back to Indiana for Game 5 on Monday.

Hill, like the rest of the Pacers, has struggled in the series, but scored 15 points, including the last basket of the game on a driving layup that put Indiana up three with 56 seconds to play.

The Hawks hit 11 three-pointers, but needed one more and failed to convert on their last three possessions.

Atlanta point guard Jeff Teague hit a deep three-pointer with 4:36 left in the fourth quarter that put the Hawks up 83-78. Hill answered with a corner three-pointer on the next possession.

George and forward David West hit back-to-back three-pointers that helped the Pacers build a four-point lead with 1:32 to play.

The Hawks did not make a field goal in the final four minutes of the game.

Atlanta forward Paul Millsap led the Hawks with 29 points, and Korver added 15. The Hawks scored 11 straight points in the second quarter and led by as many as 10. They led 58-52 at halftime.

Vince Carter sank a desperation three-pointer to give the eighth-seeded Dallas Mavericks a 109-108 victory over the top-seeded San Antonio Spurs and an unlikely 2-1 lead in the first-round series.

Only moments earlier, Spurs guard Manu Ginobili delivered what looked like would be the winner, spinning home an awkward shot over Dallas center Sam Dalembert with 1.7 seconds left.

But with guard Monta Ellis and forward Dirk Nowitzki bottled up, Carter broke free in the corner and sank the three-pointer to win the game.

The Mavs, who had lost nine regular-season games to the Spurs, continued to frustrate San Antonio with their switching defense while getting help throughout the lineup offensively.

Nowitzki finished with 18 points, Ellis delivered 29, including 12 in the fourth quarter.

Guard Jose Calderon had another strong game with 16 points. Carter finished with 11 points.

Overtime. Again. But this time, after losing two straight overtime games, the Oklahoma City Thunder survived for a 92-89 victory over the Memphis Grizzlies at FedExForum to even their first-round Western Conference playoff series at 2-2.

Reggie Jackson scored a career-high 32 points, including the last five in regulation, as the Thunder rallied from an 80-75 deficit over the last 1:20 to send the game into overtime tied at 80.

The Thunder had led by 14 with 26 seconds left in the third quarter.

In overtime, Jackson scored eight of the Thunder's 12 points and sank four free throws over the last 12.2 seconds.

Conley's three-point attempt bounced high off the iron as the overtime ended.

Memphis missed opportunities at the free-throw line, shooting 56.5 percent (13-for-23).

Thunder stars Kevin Durant and Russell Westbrook again struggled against the Grizzlies' physical defense and scored less combined (30 points) than Jackson did by himself.

Westbrook finished with 15 points, going 6-for-24 from the field, and Durant scored 15 while making 5-of-21 from the floor.