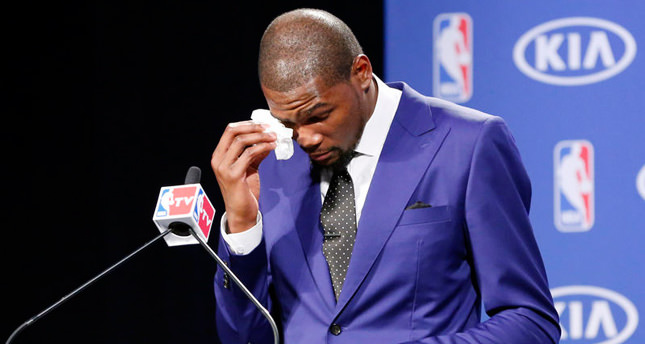 by Anadolu Agency May 07, 2014 12:00 am
OKLAHOMA CITY — Kevin Durant sobbed as he spoke of the single mother who once woke him in the middle of the night, forcing him to run hills so that he could chase greatness.

He tear up as he recounted the teammate who wrote the initials "K.D." and "MVP" on a piece of paper and placed it in his locker, girding him from doubt in the midst of a losing streak.

He paused to keep from crying as he spoke of the city that has embraced him unconditionally, cheering him even on the rare occasions his shots aren't falling and his team isn't winning.

On the day the Oklahoma City forward won the NBA's most-valuable-player award for the first time, Durant lost his steely exterior, endearing himself even more to a fan base that had long swaddled him in adoration.

"Why am I crying so much?" Durant asked, interrupting himself midsentence during an emotionally charged acceptance speech Tuesday afternoon inside the Thunder's old practice facility.

Maybe it was because the skinny kid who grew up wanting to be a rec league basketball coach had just soundly defeated four-time MVP LeBron James, collecting 119 of 125 first-place votes. James finished second with six first-place votes and the Clippers' Blake Griffin was third.


Durant won basketball's biggest individual award after a season in which he complemented his high-volume scoring with rugged defense and increased deference to his teammates. He averaged career highs in points (32.0) and assists (5.5), helping the Thunder go 25-11 in games in which star teammate Russell Westbrook was sidelined.