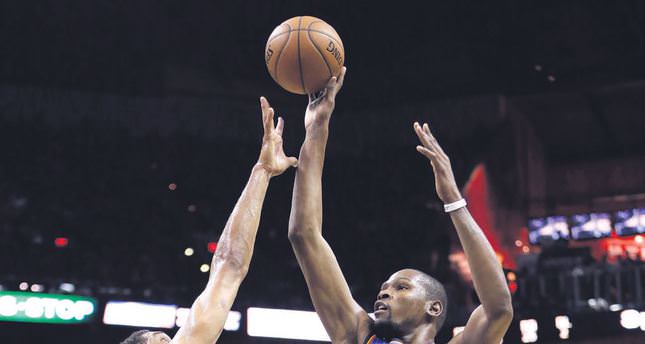 by May 21, 2014 12:00 am
SAN ANTONIO — Though the Spurs had lost all four of their regular season games to the Thunder, they lived up to their status as the top seeds in the conference and dominated in the paint to take a 1-0 lead in the best-of-seven series.

All-Star forward Tim Duncan scored a team-high 27 points and Manu Ginobili weighed in with 18 off the bench as San Antonio had five players in double-figures. The Spurs outshot their opponents by 57 percent to 46 from the field. "It was a great team win," All-Star guard Tony Parker, who contributed 14 points and 12 assists for San Antonio, told reporters. "Everybody played well. Defense was pretty good so hopefully we can keep it going."

Spurs coach Gregg Popovich was delighted with the form shown by Parker, who left last week's second-round clincher over the Portland Trail Blazers early in the second quarter due to a strained left hamstring. "I think he feels pretty good, a little winded probably but he didn't seem to have a problem with his leg tonight," said Popovich. "I thought he executed offensively really well to start the game."

Kevin Durant led Oklahoma City with 28 points and Russell Westbrook put up 25 and seven assists but the Thunder trailed for most of the game, a couple of narrow leads late in the third quarter representing their brief high points.

Oklahoma City's defense sorely missed the shot-blocking skills of forward Serge Ibaka, who is likely to miss the rest of the playoffs because of a calf injury suffered during last week's series-clinching win over the Los Angeles Clippers.

Asked how much the Spurs had benefited from the absence of Ibaka, Parker replied: "It helps a little bit. I thought our ball movement was great. We've just got to keep on doing that."

Roared on by their vocal home fans at AT&T Center, the Spurs made an explosive start by racing 20-9 ahead on a Duncan bank shot before the Thunder hit back and cut the lead to 30-27 after the first quarter.

San Antonio again pulled away as their shooters spread the floor and dominated the paint, a twisting jump shot from Parker putting them 60-48 up before they went into halftime leading 67-59.

Again the Thunder stormed back, a Westbrook jump shot giving them their first lead of the night at 76-75 with five minutes left in the third, but the Spurs regained control on a 12-2 run to enter the fourth 89-82 ahead.

San Antonio continued to dominate, a Green threepointer giving them a 93-82 advantage before Ginobili poured in two shots from beyond the arc late on to tighten his team's grip on the game.

Parker was happy with how San Antonio's defense had coped with the Thunder's one-two knockout punch of league MVP Durant and dynamic guard Westbrook. "We are not going to stop them, we are just trying to contain them," said Parker. "We're trying on every shot to make it hard on them. So far, it's working but we know they are going to come back hard for Game Two." Game Two will be played in San Antonio on Wednesday before the series shifts to Oklahoma City.