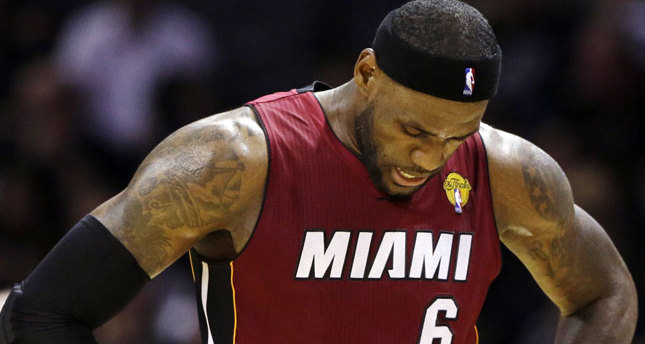 by Jun 06, 2014 12:00 am
SAN ANTONIO — Combine some offensive wizardry from Tim Duncan, heat-wave conditions which paralyzed LeBron James and late heroics from Danny Green and you have San Antonio's recipe for success Thursday at the NBA finals.

But probably the biggest single factor was the Miami Heat losing James late in the fourth quarter of game one after last year's playoff MVP. He was overcome with dehydration and cramping due to sweltering conditions inside the AT&T Arena.

"It was unusual circumstances," said James. "I never played in a building like that or it has been awhile, like a high school game."

James was forced to leave Thursday's 110-95 loss to the San Antonio Spurs late in the fourth quarter because of dehydration and cramping problems.

When James left the game with 3:59 to go in the fourth, Miami was only down by two points, 94-92. San Antonio took advantage of James' absence, outscoring the Heat 16-3 over the final four minutes.

James struggled in the fourth with dehydration as temperatures inside the AT&T Center arena soared to 30 Celsius plus because of a broken air conditioning system.

The cramping got so bad for James that he had to be carried by two teammates back to the Heat bench with four minutes left in the fourth because his legs seized up on him.

"The best option for me was not to move," said James. "I tried and with any little step or nudge it got worse.

"It would lock up worse and my muscles spasmed 10 out of 10.

James, who has struggled with cramping in the past, said he tried to hydrate himself before and during the game but because of the sweltering conditions it was no use.

Spurs guard Green made several clutch baskets in the final minutes, including one stretch where he scored 11 of the Spurs' 13 points. He capped the burst with a 24-foot three pointer to give San Antonio a 97-92 lead with 3:50 remaining.

Green had scored just two points in the first three quarters with James guarding him. But as soon as the cramping started to paralyze James, that's when Green took off.

The Heat led by seven points early in the fourth.

"Lucky for me I didn't cramp up," Green said. "We have a great training staff and strength and conditioning staff. They did a great job of keeping us fresh and with fluids and cold towels."

Duncan finished with a team-high 21 points and 10 rebounds.

It is almost as if the Spurs knew something was up before the game. So it is a good thing they gave everyone that walked in the doors of the AT&T Center Thursday a free 'Go Spurs Go' fan before the air conditioning failed.

Wet spots on the court made traction difficult for the players who also had to use ice packs on the back of their necks to try and stay cool on the bench.

The Spurs blamed the busted air conditioner on a problem with the electrical supply to the cooling system in the building.

Rod Thorn, NBA president of basketball operations, said they never considered stopping the game because of the sauna-like conditions.

"Once the games starts it is in the hands of the referees," he said. "I never said anything to them regarding the fact that the game should be cancelled."

Thorn said they expect to have the air conditioning back to normal by Sunday's game two.