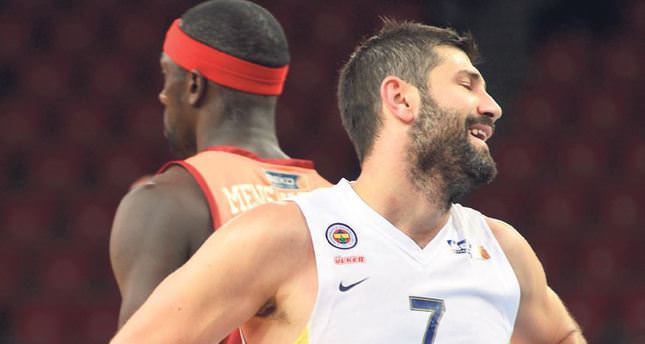 by Daily Sabah Jun 19, 2014 12:00 am
Turkish basketball team Galatasaray Liv Hospital's decision to boycott the last game of this year's league finals for uncontrolled fan violence drew strong rebukes from both its rival Fenerbahçe Ülker and the Basketball Federation.

Turkish basketball team Galatasaray Liv Hospital announced on Tuesday it would not go on court against their Istanbul rivals Fenerbahçe Ülker in the final game of Turkey's first-tier basketball league. Gala's decision increased the ongoing tension between the two leading Turkish clubs.

Fenerbahçe lashed out at Gala's decision and described it as a "black stain" on Turkish basketball. The Turkish Basketball Federation also reacted angrily to the decision.

The Federation described it as "disrespect" against Turkish security forces. Security concerns over Gala's remarks had come hours after the Turkish Basketball Federation announced that Fenerbahçe Ülker was fined TL 40,000 for the spectator incidents which occured during the previous game of the final series in Fenerbahçe Ülker's venue, Ulker Sports Arena.

Galatasaray had previously stated that the federation should order the closure of Fenerbahçe's venue for the final game. The best-of-seven series between the Turkish sports giants currently stands at 3-3, as the last game of the series is scheduled to play at Ülker Sports Arena on Thursday.

In the case Gala doesn't take to the court today, the game will be declared a default loss (20-0 will be the score) and Fenerbahçe will be declared as champion of the Turkish Basketball League. Gala will be sent to the disciplinary committee but it will not be relegated from the league. If a team does not take to the court for two matches, then it is relegated.
Last Update: Jun 19, 2014 1:23 am
RELATED TOPICS