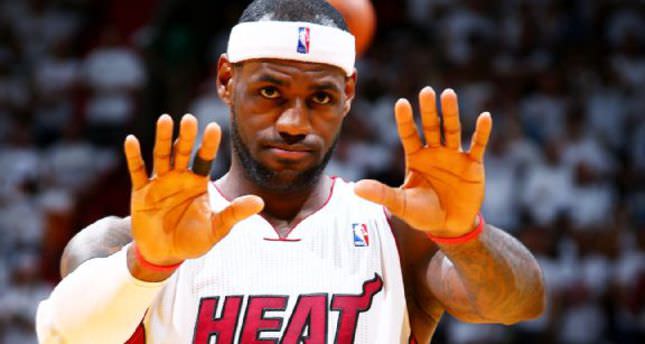 by French Press Agency - AFP
Jun 24, 2014 12:00 am
NBA superstar LeBron James has informed the Miami Heat that he will exercise an early termination option in his contract and become a free agent next week, ESPN reported Tuesday.

Richie Paul, James' agent, told the team of his client's decision, which came ahead of a deadline next Monday to decide whether or not to opt out of the last two years of his Miami contract.

James, who was set to make $20 million next season, won his first career NBA titles with the Heat in 2012 and 2013. He also led Miami to the NBA Finals in 2011, when Dallas beat the Heat, and this year, when Miami lost to San Antonio.

After the Heat's last loss in the NBA Finals, James said he wanted time on vacation with his family before considering his future plans.

James said he welcomed the chance for the same free agency freedom he had in 2010, when he signed with the Heat after spending his first seven NBA seasons in Cleveland.

James, a high school star near Akron just south of Cleveland, could attract other talented players alongside him after his stellar stint in Miami.
Opting out of his contract does not mean James could not re-sign with the Heat, but it would likely make the price tag much higher for Miami to keep the four-time NBA Most Valuable Player.

The Heat would be able to offer more money and a longer-term deal to James than any rival club, but other teams would likely bid high for the chance to land James, who was the NBA Finals Most Valuable Player in 2012 and 2013.

James could also sign with another club for less than the maximum, freeing up salary cap funds to attract other talented players in hopes of building a title contender as he did with the Heat.

Much of the talk about potential rival suitors for James has centered on a return to Cleveland, the city whose fans felt betrayed when he spurned them to take his talents to Miami.

James' wife, Savannah, posted an Instagram message late Sunday night with a map of Ohio, a star on the city of Akron and the message "Home sweet home!! The countdown is real! #330" -- the hashtage a reference to the telephone area code for Akron.

That sparked speculation, so far unconfirmed, that she might be referring to a family relocation rather than a trip home for the James clan.

The Cavaliers own the top pick in Thursday's NBA Draft and have just signed a new coach in Dave Blatt, who guided Tel Aviv to a Euroleague crown this year and Russia to a bronze medal at the 2012 London Olympics.