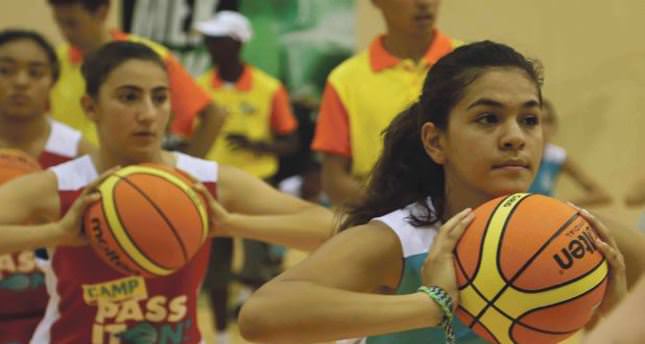 Yesterday in Besiktas Barbaros Square, 224 young basketball players from 87 different countries showcased their skills as part of a 3x3 basketball tournament, capping off one week at Camp PASS IT ON, courtesy of the Turkish Basketball Federation (TBF). Coming from as far away as Afghanistan, China, India, Swaziland, Brazil, and the U.S., country delegations featuring one boy, one girl, and one young coach spent the week together receiving training from expert coaches, both foreign and Turkish, at the Darüssafaka Society. In addition to the TBF's international guests, 55 Turkish children from across the country joined the camp as part of the ongoing celebration of the TBF's 55th anniversary. "At TBF, basketball is about far more than what happens on the court," TBF President Turgay Demirel said. "At Camp PASS IT ON these children and coaches have learned about values like hard work, respect, and passion. These are the values of Turkish Basketball, and these are the values we shared with our visitors this week."

Prior to Sunday's exhibition, the basketball players had enjoyed a week that included basketball practices, a Bosporus cruise, a tour of Istanbul's historic sites, the inauguration of the PASS IT ON Garden at the TBF House, a night of Turkish culture, and Thursday night's men's national team exhibition game between Turkey and Spain at Abdi Ipekçi Arena. "[Some] of our goals are that after the camp when they return home, the participants will have positive views of our country, will have improved their basketball skills, have made new friends, will have happy memories, and feel that it was good that they were at Camp PASS IT ON," TBF Youth Development Director and Camp PASS IT ON Director Samer Senbayrak said.

By that standard, the camp seems to have been a success. "For me, it's wonderful," said Cansu Sani, a 14-year-old camper from Van. "It's great to do something together with other athletes coming from other countries." Young basketball players were not the only ones with high praise for the camp. "Despite having players representing so many countries, basketball creates a cohesive unit," Canadian coach Emily Wright said. "Camp PASS IT ON does such a great job at this. There should be more camps like this around the world." Yesterday afternoon the youngsters had the opportunity to show off their newly learned skills in front of the public in Besiktas. In addition to the on-court action, the trophy for the 2014 FIBA World Championship for Women was on display. Istanbul and Ankara play host to the world's top 16 women's national teams in Istanbul and Ankara from September 27-October 5, and Turkey will be making its tournament debut. PASS IT ON camper Ilayda Sahiner has high hopes for the national team and her favorite player, point guard Isıl Alben. "I believe that [Alben] will succeed, there's nothing else to say," the 13-year-old from Amasya
said. "She can do whatever she wants."
Last Update: Aug 18, 2014 2:35 am
RELATED TOPICS