The Ataman Empire pushes USA all the way 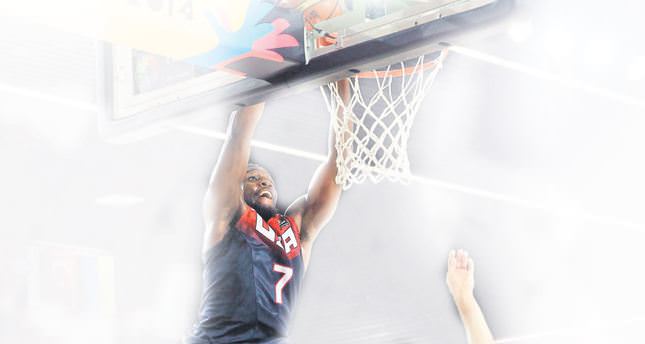 The final score of the U.S.A. win was not indicative of Turkey's play. Turkey held the lead at halftime and kept it early in the third quarter. But the Americans came alive in the final period

Turkey came within a quarter of pulling off a stunning upset against the U.S.A. on Sunday night in their second Group C match at the 2014 FIBA World Cup. The Yanks eventually pulled the game back late in the third quarter and a dominant final period saw U.S.A. finally come out comfortably on top 98-77 in a rematch of the World Cup final four years ago in Istanbul.

Turkish star Ender Arslan - who finished with eight points and four assists - blamed his side's late collapse on the fitness of U.S.A. "Before the game we talked about trying to keep the tempo low, in fact slow down the game and we did it very well in the first half. I think actually three quarters we did it very well," Turkey's Arslan said. "But, physically the United States team is great, after they played 40 minutes ... so we got a little bit tired after the third quarter and they still played at the same level." Turkey - or the Ataman Empire, as they have become known on account of their coach Ergin Ataman - shot out of the blocks early on and surprised U.S.A. by finishing the first quarter at 16-16 with the Turks marginally the better performers. Their ascendency continued into the second quarter.

The two sides exchanged points until Baris Hersek and Emir Preldzic made consecutive 3-pointers late in the half to give Turkey a 38-32 lead. U.S.A. went into the half shell-shocked as Turkey held at five-point lead at 40-35. "I guess we felt like last night's game [a 59-point win over Finland] was pretty easy and tonight was going to be the same way, but Turkey came out and they gave us their punch from the beginning," U.S.A. guard James Harden said. "We took it and we were sluggish. That second half we played a lot better."

Turkey managed to extend their lead to six in the third quarter before U.S.A. came back as they are wont to do. Tied at 59-59 with just three minutes left in the quarter, team U.S.A. pulled off a 7-1 burst that saw them take a six point lead into the final period. They would never look back. An early 17-1 run in the fourth quarter broke Turkish dreams of a famous victory. "I think we didn't come ready to play in the first half and we can't afford to do that if we want to win a gold medal," Anthony Davis of team U.S.A. said. "So we've got to come out ready to play no matter who we're playing against."

Cenk Akyol was Turkey's top scorer with 12 points and the only player to score in double figures although three players finished with nine points. Kenneth Faried of the Denver Nuggets was U.S.A.'s top performer with 22 points and eight rebounds while Anthony Davis had 19 points, all coming in the second half. Elsewhere in Turkey's group, Finland pulled off a surprise win over Ukraine 81-76.

Shawn Huff was Finland's star with 23 points and eight rebounds. Hosts Spain continued their hot start in Group A with a 91-54 humbling of minnows Egypt. The win gave Spain the chance to give some of their top players some valuable rest with no player playing more than 21 minutes.

Oklahoma City Thunder's Serge Ibaka had 18 points and eight rebounds in just 21 minutes of play, as well as bringing his usual terrifying defense. France overcame Serbia 74-73 in Group A's other matchup. Elsewhere in Group A, Brazil beat Iran by 29 points in a one-sided 79-50 win. NBA duo Tiago Splitter and Leandro Barbosa scored 21 points between them while Iran star Samad Nikkhah Bahrami had a shocker, shooting just 10 percent from the field in a forgettable performance. In Group B, Greece overcame a tough Philippines team 82-70 with Georgios Printezis the difference, scoring a game-high 25 points to go with eight rebounds.

The Philippines' Andray Blatche of the Brooklyn Nets had 21 points and 14 rebounds. The favorites in Group B, Argentina and Croatia put on a riveting show with the Europeans marginally coming out 90-85 winners with Bojan Bogdanovic of the Brooklyn Nets starring with 16 points and seven rebounds. The Indiana Pacers' Luis Scola was the game's standout performer with 30 points and nine rebounds for the veteran.
RELATED TOPICS