From Bosnia to Turkey: The story of Fenerbahçe's star Emir 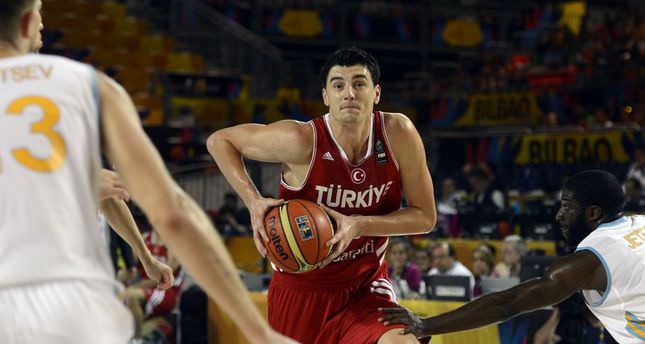 by Daily Sabah Sep 08, 2014 12:00 am
Emir Preldzic's miraculous 3-pointer on Sunday night lifted a whole nation, but not the nation of his birth. So, who is Preldzic? He is a Turkish professional basketball player who plays for Fenerbahçe Ülker of the Turkish Basketball League and who also represents the Turkish national basketball team, doing so with distinction in the FIBA World Cup. He is 6 ft 9 in (2.06 m) tall and he mainly plays the small forward position, but he also has the ability to play as a power forward, shooting guard and point guard.

Preldzic began his career playing with Celik Zenica youth teams in his native Bosnia and Herzegovina. He made his pro debut with Celik Zenica in the Bosnia and Herzegovina League during the 2003-04 season. In the 2004-05 season he played with Triglav Kranj. He then moved to the Adriatic League club Geoplin Slovan for the 2005-06 season. In the 2009 NBA Draft, Preldzic was selected by the Phoenix Suns in the second round, with the 57th draft pick. His draft rights were then traded to the Cleveland Cavaliers, and later to the Washington Wizards in a February 2010 trade that sent Antawn Jamison from Washington to Cleveland. On July 17, 2014, the Dallas Mavericks acquired Preldzic's rights from the Wizards in a sign-and-trade deal for DeJuan Blair. Preldzic was a member of the Slovenian national basketball team and he competed for Slovenia at the 2008 Olympic Qualification Tournament. Before 2011, the Bosnian media speculated that Preldzic may play for the Bosnian national basketball team because of his birthplace Zenica, a city in modern Bosnia and Herzegovina.

However, on July 6, 2011, the Turkish Basketball Federation announced Preldzic's name in its official nominated squad for the EuroBasket 2011 held in Lithuania. Preldzic decided to change national team using the FIBA regulation on Eligibility and National Status of Players.