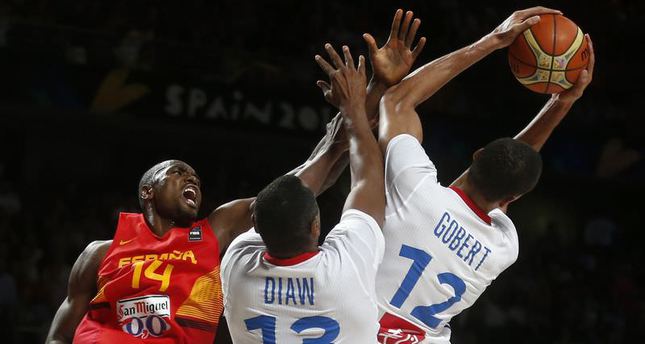 Les Bleus stun the Spanish as the favorites crash out of the tournament without being able to challenge old nemesis Team USA. France will play Serbia in the semi-finals

Les Bleus stun the Spanish as the favorites crash out of the tournament without being able to challenge old nemesis Team USA
France pulled off the shock of the tournament as they beat favorites and hosts Spain 65-52 in the quarter-finals of the FIBA World Cup on Wednesday, bringing an end to Spain's Golden Generation.

The huge fraternal duo of Pau and Marc Gasol were believed to be the only frontline in the tournament capable of dismantling USA. Allied to their home advantage, Spain were considered favorites in a tournament that the Americans usually dominate. Instead of the mouth-watering final between Spain and the U.S., which would have been a rematch of the 2008 and 2012 Olympic finals, the Spanish will have to go back to the drawing board knowing that star players like Pau Gasol, Juan Carlos Navarro and Jose Calderon may have played their last game in red and yellow.
"It's a very painful loss," Pau Gasol said. "It's comparable to the loss we had in Athens in 2004 to win every game in the championship to get to the quarterfinals, being the favorite and then losing. "It's a disappointing, painful loss, but it's part of the sport." Led by team captain Boris Diaw of the San Antonio Spurs, France locked down Spain's big men and took advantage of Spain's shoddy shooting to grab a semi-final place.
The unlikely figure of Rudy Gobert proved to be the catalyst for France, securing the paint and rendering the Gasol brothers and Serge Ibaka ineffective.

"We came, we worked a lot in practice, we had nothing to lose," said Gobert, who finished with five points (2-for-4), 13 rebounds and one block. "They had the crowd. We just played hard."

"I knew everybody was expecting me to help the team," said Gobert, who averaged 2.3 points and 3.4 rebounds for the Utah Jazz last season amid two stints in the D-League. "Everybody knew I could stop them. That was just my mission. Everyone else played great offensively. I just had to stop Pau. He's one of the best players in the world and if you stop him, they're not as strong."

While France put on a special show, particularly without their two best players, Tony Parker and Joakim Noah, Spain did nothing to help themselves, shooting a dismal nine percent from 3-point range while Marc Gasol, Ricky Rubio and Ibaka – all key, experienced performers – shot a combined 3-for-21 from the field.

While Gasol and Ibaka are seasoned midrange shooters, Rubio has become a notoriously bad shooter, and France coach Vincent Collet said after the game that his side was able to take advantage of Rubio's inability to hit open jump shots.

"The second problem was holding them in the half court," Collet said. "You cannot stop Pau Gasol all the time but we were digging a lot. We took risks with their group of outside players. We used [Ricky] Rubio's defender to give extra help inside, leaving him open sometimes. We tried to put pressure on their big men every time."

After taking an early lead into the half, Spain looked to have pulled the game back in style when a spectacular Rudy Fernandez alley-oop gave Spain a 43-42 lead with 24 seconds left of the third quarter.

"We knew that if we kept it close, they're going to die because they can't lose this game," Portland Trail Blazers forward Nicolas Batum said. "It's their World Cup in their home country. So if we stayed close, we'd have a chance down the stretch and we did it.

"We had momentum on our side. And the crowd wasn't into it at the end. That was our goal. Don't bring the crowd into it. When they started coming back, we didn't panic. We stayed calm. They got a good run but we stayed together, we kept playing our defense, we stayed together and we did it."
Pau Gasol topped all scorers with 17 points while Diaw led France with 15 points. Thomas Heurtel, France's key man down the stretch, had 13 points.

France will move on to play Serbia in the semi-finals after the Eastern European team sunk Brazil 84-56.