Serbia through to World Cup finals after thriller 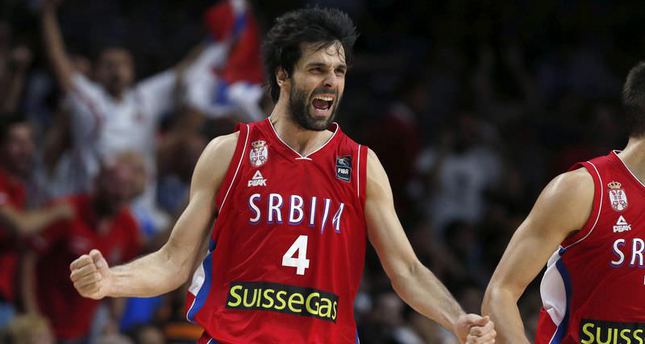 by AA Sep 13, 2014 12:00 am
Serbia set themselves up for a final against favorites USA after closely defeating France 90-85 in a thrilling 2014 FIBA Basketball World Cup semifinal game in Madrid on Friday night.

In the first and second quarters, Serbia dominated the game by scoring 46 points while France had 32, and the third saw teams hold their own. However in the early minutes of the last quarter, France showed a firm reaction against Serbia and managed to decrease the gap to single digits for a while. "Les Bleus" (The Blues) fought bravely against Serbia by scoring 39 points in the last quarter, but resilient Serbia saw to it that they would be the ones to challenge the unbeaten first finalists.

As a team, France made 15 three-point shots out of 33 throughout the game.

On the other hand, Serbia clinched the victory thanks in no small part to their two guards' individual efforts, Milos Teodosic and Bogdan Bogdanovic.

CSKA Moscow skipper Teodosic scored 24 points and made three assists in addition to three rebounds. In the meantime, Fenerbahce Ulker's new signing Bogdanovic -- taking responsibility in critical moments of the play -- completed the clash with 13 points and four assists. His fellow teammate from Fenerbahce Ulker, Nemanja Bjelica was also one of the key players for Serbia as the 26-year-old small forward managed 10 points, five assists and seven rebounds.

Unicaja Malaga point guard Stefan Markovic, who was fouled out in the fourth quarter, ended the showdown with 11 points, five assists and three rebounds.

The two towering centers of Serbia, Nenad Krstic and Miroslav Raduljica also played an important role for the win by scoring 11 points apiece.

Having defeated France by a 5-point-gap in semis, Serbia will face USA in 2014 FIBA Basketball World Cup final match, which tips off Sunday at 21.00 CET (2000 GMT) in Madrid.

France will be playing a third place playoff versus Lithuania on Saturday. The showdown between the two European sides in Madrid will begin at 18.00 CET (1700 GMT).