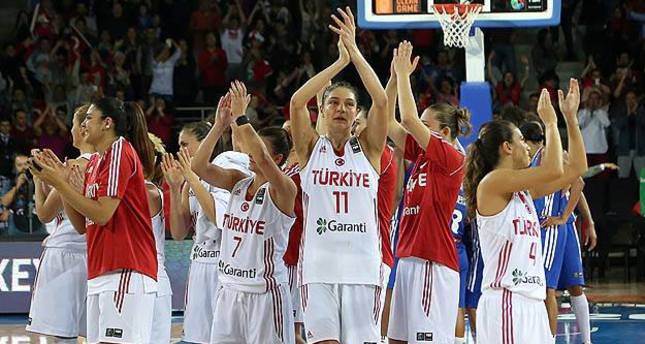 by Kenny Laurie Sep 29, 2014 12:00 am
Turkey got off to the perfect start in the FIBA Women's World Championships on Saturday, impressively overcoming France 50-48 in Ankara. Işıl Alben hit the winning 3-point basket deep into the game to secure the win and a valuable start to a difficult tournament. Much like their male counterparts in the recent FIBA World Cup, Turkey seem to have already made a habit of winning close, come-from-behind wins with last-minute 3-pointers. Turkey had trailed by 10 points at the half and looked to be destined for a disappointing start to the championships. But the Turks rallied in the third quarter and eventually took the lead thanks to Nevriye Yılmaz's 3-pointer. In a nervy fourth-quarter finish, France took a 48-47 lead with nearly two minutes left on the clock after Emilie Gomis's 3-point shot. With points at a premium in the final two minutes, Alben's 3-pointer, hit with under a minute left, proved to be the decisive blow. France did have the opportunity to win the game back but both Gomis and Celine Dumerc failed to take their opportunities. The winning basket invoked memories of the heroics of Emir Preldezic in the World Cup, who hit a series of clutch shots a fortnight ago. Esmeral Tunçluer brought the ball up from a rebound before pulling up at the 3-point arc. With the French defense scrambling before whipping the ball to the other side of the court, swinging around to Alben in the corner who drained the all-important shot, sending the capacity wild. Turkey played their second game against Canada last night after press time. "It is a pleasure to welcome the international basketball family back to Istanbul and Ankara four years after hosting the 2010 FIBA World Championship," Turkish Basketball Federation (TBF) President Turgay Demirel said. "The women on the national team have achieved unprecedented successes in recent years, and I know they will inspire the nation once again.

"I think together with our fans it's going to be a really great atmosphere," she said. "When we finish the group and come to Istanbul for the final games we'll want everyone to come and support us." Elsewhere in Group B, Canada overcame a stubborn Mozambique 69-54 led by young star Miah-Marie Langlois. The 23-year-old hit three of her four 3-point attempts to outshine her much-vaunted backcourt teammate Kia Nurse. "It felt good and especially because we have been practicing for so long that we just wanted to get out there and put everything onto the floor," said Langlois. "Hopefully this is just the start of a long national team career for me now and I just want it to keep on going," Langlois said. "It's absolutely amazing to see all the different styles of basketball at this level - something that has passed me by a little, since I have only ever played within Canada. "This summer has been an outstanding learning experience for me. It was the first game of the tournament and maybe a few people had some nerves," she confessed. But hopefully we got it all out and can focus more on the next team." Serbia, trying to emulate their male counterparts who reached the final of the World Cup earlier this month, got off to a rousing start in Group D, beating Angola 102-42. Jelena Milovanovic, who plays for the Washington Mystics, claimed the win was just the beginning, describing her team's quest as a "mission for the Serbian flag." "Our men's team in Spain has brought a lot of energy into our team," the 25-year-old, who hit eight of 10 from the field against Angola, said. "We may not reach that far, but it won't be for want of effort. They (the National Federation) have given us everything. The least we can do is give our best effort on court. "The men have showed us how to play for the Serbian flag and we are determined to repeat that. "This is my first World Championship. I hope it's not the last. I will give my very best here. "I was very excited to play here. I couldn't wait to be here. We are happy with the start. "It's good all the players scored. It's a very good sign for the Serbian team. It means our plans are working well. "We played them [Angola] during our preparation and we know their game. We just gave our best." Elsewhere in Group D, the U.S. overcame rivals China 87-56. In Group C, Australia and Belarus picked up wins against Cuba and South Korea respectively while in Group A Spain beat Japan and the Czech Republic overcame Brazil.