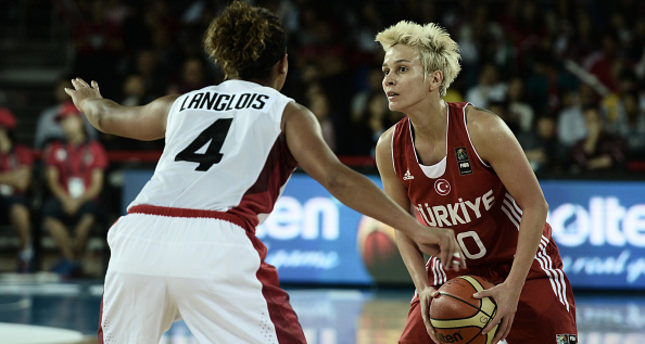 by Daily Sabah Sep 30, 2014 12:00 am
Turkey's women pulled off another superb win in the FIBA Women's World Championships, beating Canada 55-44 in Ankara to take charge of Group B. The game at the Ankara Arena was tight throughout the first three quarters, with the score deadlocked at 31-31, before the hosts made a final quarter run to win comfortably. Shooting guard Kim Gaucher had hit a buzzer-beating 3-point shot for Canada to equalize the score at 31 but the Canadian heroics ended there as the North Americans were unable to hold off Turkish power forward Lara Sanders in the final period. Turkey scored 24 points in the last quarter with point guards Işıl Alben and Birsel Vardarlı's taking the lead, while Sanders did the damage inside. Turkey played solid defense against the Canadians to finish the game and secure their second victory. Sanders was on top form for Turkey, finishing with 18 points, six rebounds and five blocks. Center Nevriye Yılmaz joined her team-mate with 13 points and five rebounds. Gaucher and forward Katherine Plouffe's nine points were not enough for Canada with no player scoring in double-digit points for the North American side. That makes it two games in a row that Turkey have prevented an opposition player from scoring in double figures. The defeat was Canada's first of the tournament and they will play a crucial last match against France - who lost to Turkey in the opening game - today at 21:15 in Ankara. With that victory, Turkey topped Group B after two games and will play with Mozambique today at 19:00 in Ankara.

Elsewhere in the tournament, Belarus beat Cuba thanks to their small forward Katsiaryna Snytsina's 3-point shot with 14 seconds to go. Cuba started the game strongly and led after the first quarter 22-15 thanks to their shooting guard Leidys Oquendo. However, Belarus pulled the game back in the second quarter, only trailing by two at the break, 35-37. The Cubans played good defense throughout the third quarter to increase their lead to six after the third period, 56-50. In the final quarter, Cuba choked offensively and could not score a single point after leading 69-58 with three minutes and 19 seconds to go in the game. After that point, the Belarusian team got hot from the inside and the outside. Katsiaryna Snytsina put the dagger in Cuba's heart as she sank a 3-point shot with 14 seconds to go. The Cuban team were unable to take their final chance and Belarus got their second victory to claim second place in Group C after two games. The loss was the second-in-a-row for Cuba. In two other games on Sunday, Spain and the U.S. both earned victory. Spain beat Brazil 83-56 in their Group A match, which was played in Ankara, with the Europeans dominating from the second quarter.

The Spanish team was able to outscore the Brazilians 29-13 in the second quarter to claim a commanding 15-point lead at the half. Things just got better for Spain as they cruised to a 27-point victory to top Group A. Galatasaray OdeaBank's superb duo put in classy performances again with power forward Sancho Lyttle's all-round excellence and shooting guard Alba Torrens' high-scoring game doing the damage for Spain. Lyttle finished with 15 points, 13 rebounds for a double-double and added five assists. Torrens scored 15 points as well while her team-mate Anna Cruz chipped in with 13 points. Brazil's center Erika Souza was the only Brazilian player to score in double-digits, but her 12 points wasn't enough against a strong Spain team. Brazil are still looking for a win after two games and fall to the bottom of Group A. Tournament favorites Team USA beat Serbia by 20 points, 94-74, to take command in Group D. The match in Istanbul saw some fight from the Serbian side, with the Europeans up by four points after the first quarter, 21-17. However, the indomitable U.S. side put on a high-scoring performance in the second quarter with superstar shooting guard Diana Taurasi's leading the way, finishing the half ahead, 49-42. Serbia managed to hold the U.S. off in the third quarter and were only trailing by six points after the third quarter, thanks to their shooting guard Ana Dabovic's scoring. The last quarter was all about the U.S. as they allowed Serbia only 10 points. Taurasi scored 20 points for Team USA as she was joined by forward Maya Moore with 17 points, 12 rebounds and six assists in an all-round effort. The game's high-scorer was Dabovic with 24 points but Serbia still fell short, suffering their first loss of the tournament.