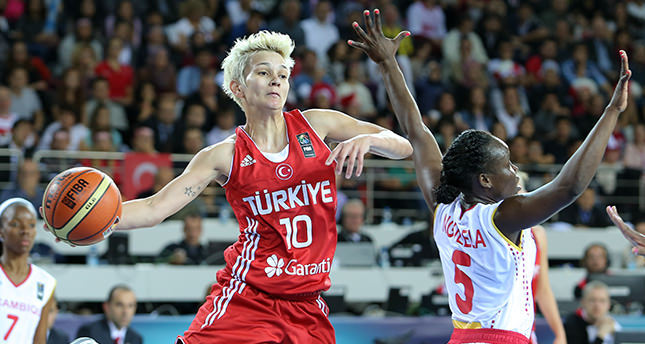 Turkey defeat Mozambique 64-54, their third consecutive victory at the FIBA Women’s World Championship, making it through to the quarter-finals

Turkey's women's basketball team made history at the 2014 FIBA World Championships in Turkey as they moved into the knockout stages undefeated for the first time in their history. After beating France and Canada, Turkey defeated Mozambique in Group B 64-54 on Tuesday. Turkish national team coach Ceyhun Yıldızoğlu praised his squad after the game, highlighting the performance of those who had previously seen few minutes on the court. "We tried different things in the match against Mozambique and let our tired players have a rest," said Yıldızoğlu. "We gave a chance to our other players in this match. Both Begüm Dalgalar and Cansu Köksal put in a great performance. Turkish player Begüm Dalgalar said, "We played fast against Mozambique with a larger team. We are happy that we made it through to the qaurter-finals with the top spot in the group."

Turkey and Spain have both made it through to the FIBA Women's World Championship quarter-finals with the four other European teams also in contention for a spot. Already assured of a place in the quarters, Turkey's head coach Yıldızoğlu watched his team labor in trying to rack up a big victory in front of another huge Ankara crowd. To their credit, Mozambique signed off their participation in the tournament with a feisty and proud performance. The hosts' relatively under-par performance can be credited, in part, to them only giving limited minutes to their big-hitters. There was a memorable moment for teenage center, Tilbe Şenyürek who claimed her first ever basket at senior level, while fellow tournament debutante, Köksal added an efficient seven points and four rebounds.

Elsewhere, Lucas Mondelo and his Spain team again showed their medal potential as they stormed into the last eight of the competition with a comprehensive win against the Czech Republic. Sancho Lyttle accumulated 17 points and 14 boards to put her opponents to the sword and ensure a place in the final phase in Istanbul, where she plays her club basketball with Galatasary Odeabank. The Spanish defense suffocated the Czechs, who couldn't get a single player into double-digits and they will now play Canada for a quarter-final place. Still without the influential Endene Miyem, France struggled to get past Canada, allowing a 10-point lead evaporate - only to eventually get the job done down the stretch.

The victory set up a meeting with Brazil in a do-or-die game to make the quarter-finals. Marielle Amant and Gaelle Skrela both claimed 10 points, with the former scoring a big basket inside the last 30 seconds, while Sandrine Gruda top scored with 13. In Group C, after a couple of nail-biting wins, Belarus came crashing back down to earth against one of the medal favourites in the fight to take the automatic spot for the last eight. Only Yelena Leuchanka put up any real resistance with a creditable 12 points and 10 rebounds, as Belarus were punished for a sluggish start.

Already down by double figures after the first quarter, they only scored eight points in the second period and that prevented them from hanging tough with the Opals. Belarus will now play China in a bid to extend their stay in Istanbul. In Group D Marina Maljkovic and her players were left to breathe a huge sigh of relief after squeezing past China to set up a showdown against Cuba for a berth in the quarters. Tamara Radocaj and Jelena Milovanovic were the game winners for Serbia. Radocaj had the hot-hand with 19 points from a brilliant seven of eight floor shooting display, while Milovanovic completed an "and-1" play during crunch time to overturn a one-point deficit and score what proved to be the decisive basket.