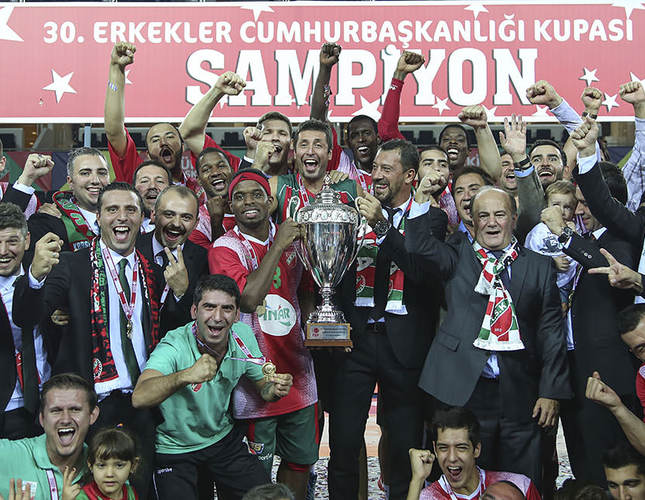 by Kenny Laurie Oct 08, 2014 12:00 am
Pınar Karşıyaka lifted basketball's Turkish President's Cup after beating reigning league champion Fenerbahçe 77-75 on Wednesday, with coach Ufuk Sarıca claiming that his side is a better team than the league holders.

Despite a slow start to the game, the İzmir team outgunned their more expensively arranged opponents to claim for the first piece of silverware of the season.

Karşıyaka, the reigning Turkish Cup champions, held on late to down Fener, showing off their team spirit against more illustrious foes.

"Although it's the beginning of the season and we're a new team, we have proved that this team has a character," said Sarıca. "We are a contender for every cup and every final this season. Fenerbahçe might have expensive and better skilled players as individuals, but we are better as a team."

It was hard to argue with that statement on Wednesday. Pınar Karşıyaka needed to dig in early after they went the first four minutes of the game without scoring a point before a hail storm of 3-pointers dragged them back in. Bobby Dixon, John Diebler and Kenny Gabriel all drained from the outside to give Pınar Karşıyaka a 23-20 lead in the first quarter.

Fener hit back in the second quarter, dominating in the paint while Pınar Karşıyaka kept bombing from behind the arc, although not to the same prolific degree. The league champs took a 41-40 lead into the half time break.

Fenerbahçe took the initiative in the third with Andrew Goudelock at the forefront while the Turkish Cup holders' luck from behind the arc began to wane. Fener managed to open up an eight-point lead going into the fourth quarter 66-58 ahead. They had plenty of time to enjoy their lead after the game was suspended for 20 minutes thanks to the two shot clocks above the hoops breaking. The situation was eventually elevated by putting a clock at the half court line while the crowd counted down the last 10 seconds of the shot clock.

Pınar Karşıyaka were able to take advantage of the long break and quickly closed the gap. Two consecutive 3-pointers gave them the lead at 73-71 before closing out the win.

The team raised the cup for the first time in season of 1986-1987 playing against Turkey's Beşiktaş.