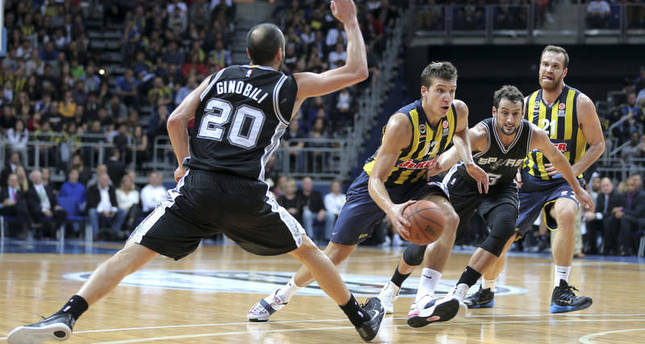 Fenerbahçe coach Zeljko Obradovic spent the summer watching and studying the San Antonio Spurs and their coach Gregg Popovich. In the end, it might have been the NBA champions who left the Ulker Arena learning from the opposition. Despite losing 96-90, Fenerbahçe put in a more than credible performance against a team that Obradovic described as "the best in the world," even leading in the third quarter bringing a capacity crowd to full voice. "For us it was a very big honor to have the best team in the world in our gym," said Obradovic. "This was something I told my players, that this is something really special and I told them to enjoy themselves and watch carefully the players of the Spurs and how they play." There is something natural about the Spurs playing their pre-season program abroad. Their squad is packed with international players and their coach, Popovich, is an outspoken fan of the international game, and is especially reverent toward Obradovich, even giving him a personal entrance to the post-game press conference as well as the two exchanging bottles of wine and dinner in Istanbul. The respect is two way, it could barely be anything else. Popovich has five NBA titles to his name; he is the pilot of the best run team in the league and is generally considered to be one of the top five coaches of all time. "He [Popovich] is really someone special and it was really special to play San Antonio," said Obradovic. "This summer I spent many, many hours studying the game of San Antonio and I spoke to coach Popovich about this. If you watch, everything is under control, the players know where to go, how to play, they move the ball like no team in the U.S. or Europe. So it's really great to watch them, to have them here, to improve." Fenerbahçe gave the Spurs plenty to think about. Former Los Angeles Lakers guard Andrew Goudelock finished with 30 points, shooting the lights out in the third quarter to give the hosts the lead while Emir Preldzic racked up 11 assists before leaving the game with a sore arm following a turnover. Fans needn't worry about their star forward, who was one of the best players at this summer's World Cup, with his coach jokingly dismissing his injury as just an excuse for a bad turnover.

"Emir is excellent, there is no problem," said the Serb. "This is the typical reaction of a player that makes a turnover. Seriously, it's ok."

With NBA Finals MVP Kawhi Leonard - whom a member of the press corps accidentally called Kobe Leonard, prompting Popovich to say, "I thought you combined Kobe [Bryant] and Kawhi - I'll take him, whatever that would be, I'll take him" - missing due to an eye infection as well as Tiago Splitter and Danny Green, the Spurs weren't at full strength. But they are the deepest team in the NBA and Leonard's replacement Kyle Anderson - a newly drafted player and the only player with the Spurs who wasn't on last year's roster - put in a good showing with nine points and two assists. The Spurs took an eight-point lead after the first quarter before Fenerbahçe pulled back a point before half time, with Oğuz Savaş - who finished with 15 points - scored a buzzer-beating 3-pointer from the halfway line, following Matt Bonner's 3. In the third quarter, a sedate crowd that had previously been somewhat in awe of the Spurs, began to resemble their usual self. An alley-oop and 1 for Jan Vesely brought Fenerbahçe to within nine points, igniting the crowd in the process. The Czech high flyer followed up the trick a moment later. A pair of Andrew Goudelock 3-pointers put Fener one point ahead at 63-62. Unfortunately for the hosts that was as good as it got. Tony Parker - who finished with 22 points, seven rebounds and seven assists - regained the lead for the Spurs and they were ahead 73-66 in the blink of an eye, never looking back again.

For coach Pop it was a chance to see some younger players as well as a chance to see a city he admittedly loves and has been to many times before. "I have known coach Obradovic for a while, he's a good friend and a great coach," said Popovich. "More than anything it was great to see him again. He brought me wine and I brought him wine. For me that was a great part of the evening because you don't always see your colleagues overseas.

"Teşekkur ederim (Thanks) to Istanbul, it has been great, it's my ninth time coming, I always enjoy it, I always find another layer of culture or society every time I come, new food every time I come. The players were very surprised because many of them hadn't been to Istanbul before and they really enjoyed themselves and they really enjoyed it. We brought a lot of people, the executives, people behind the scenes, players, wives and it was too short a time, it was great."