Parker: Turkish basketball on the up 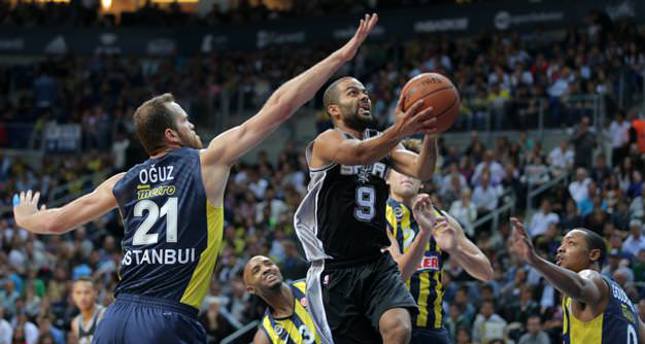 by Kenny Laurie Oct 14, 2014 12:00 am
San Antonio Spurs point guard Tony Parker believes Turkish basketball is on the up and that every player in Fenerbahçe's lineup has the ability to play in the NBA. The Frenchman put in a typically understated quality game against the Turkish champions on Saturday, shaking off close season rust to score 22 points adding seven rebounds and seven assists to help the Spurs to a 96-90 win. Despite causing Fener no end of problems, Parker had nothing but good things to say about his opposition. Fenerbahçe already boasts former NBA talents in Jan Vesely, Semih Erden and Andrew Goudelock as well as players already drafted such as Bogdan Bogdanovic, Emir Preldzic and Nemanja Bjelica but Parker believes there isn't a player on the lineup that couldn't hold their own in the world's biggest league. "Fenerbahce played great, we give them a lot of credit, they made it hard for us," said Parker. "Turkey has brought a lot of great players to the NBA. Of course I played with Hedo Turkoglu, he was a great player for us, I came from the same draft as Mehmet Okur, there are plenty of talented players and the national team are playing very well. On Saturday, there were a lot of talented players, they played great, they are talented enough to play in the NBA, it's about having the right situation and the right opportunity then they can make it." Parker is coming off one of the best seasons of his career after leading the Spurs to their fifth title and his fourth. Usually a fixture with the French national team in the summer tournaments, Parker made the decision that, as a man in his early 30s who has faced wear and tear from constant game time, taking the summer off was the best thing for him and the club. Unusually for Parker, he played 35 minutes in the pre-season game with Fener, with the point guard usually rested by coach Gregg Popovich. Complaining of rust before the game, Parker played a normal game's worth of minutes.

"I feel great, I didn't play all summer," said Parker. "I took it off because I have played like 10 straight summers for the French national team so I felt I owed it to the Spurs to be fresh and give us a chance to repeat. I can't wait, I'm ready to go, I haven't played for a while so I feel great and the season is coming fast."