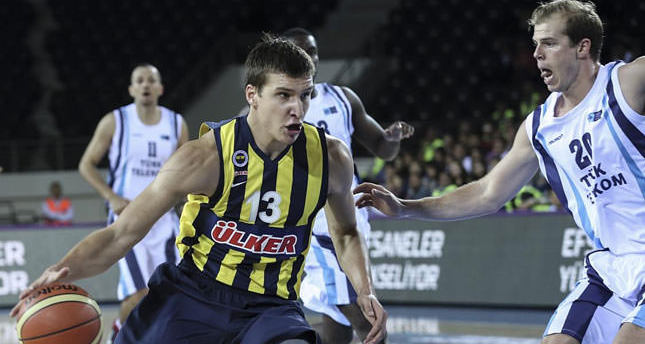 by Daily Sabah Oct 25, 2014 12:00 am
Turkish basketball enjoyed a perfect night Thursday in the EuroLeague group phase as Fenerbahçe and Galatasaray both registered wins, beating PGE Turow Zgorzelec and Valencia respectively. Fenerbahçe maintained their perfect start to the competition with a comfortable 91-76 win over Turow on the back of Andrew Goudelock's 27 points. The Istanbul side were never seriously threatened by the Polish team who fell behind by 15 points in the first quarter and never recovered.

Fenerbahçe were expected to collect a simple win against the EuroLeague debutants but coach Zeljko Obradovic insisted his side took the game seriously and never underestimated the Polish side. "We treated this match very seriously," said the Serb. "We knew about Turow in the Euroleague and that they played their first game very well. I told my players to forget that Turow was in the Euroleague for the first time and to be really wary of them. We started very well. We have to work on [turnovers]; we cannot commit ones like we did today. Turow showed character and showed us that they are a very good team." The Fenerbahçe players obviously took heed of their coach's words.

The Turkish team shot out of the blocks going on a 13-0 run, capped off by a smart jump hook from Jan Vesely, setting the early precedent that Fenerbahçe did not plan on being polite hosts. A 30-15 lead was taken into the second quarter before Mardy Collins almost single handedly helped the Poles get back into a more respectable position, going into the half 50-40. The Poles retained their momentum into the second half, at one point getting the score to 66-60 before Emir Preldzic, so often the man for the big occasion, hit a 3-pointer to give the visitors a nine-point lead going into the last quarter where Fener made sure of the points. "It was a good game for us all," said Goudelock.

"I am glad that we did what we had to do down the stretch. We made it closer than it should have been, but every win is a win and we will take it. They were coming back, making a big surge and we tried to focus as much as we could. We are lacking some little things sometimes - turnovers, losing concentration on defense, not remembering our offense ... We will be fine. It is only the second Euroleague game; we have a long way to go." Turow were humble in defeat with Kulig Damian claiming the best side won. "Fenerbahçe is a very strong team," said Damian. "We failed at the beginning because we let them do what they wanted to. Then we had to make up for that for the rest of the game. We didn't deserve this loss." Turow coach Rajkovic Miodrag said, "In this moment we did our best. I wish Fenerbahçe all the best for the rest of the season. We tried to interrupt their game, not to let them do what they wanted to, but you have to keep in mind that we played against one of the best teams in Europe. We had problems with offensive rebounds. It was a good lesson for us and I hope we will learn a lot from this game and will use that knowledge in future games."

Galatasaray moved on from a tough week that saw them try to sever ties with former Portland Trail Blazer Nolan Smith, with a 71-64 win over Valencia in Istanbul. Gala coach Ergin Ataman after the game insisted that Smith would never play for the club again after throwing his towel at the coach during their 69-67 loss to Banvit. Smith's fellow point guard Carlos Arroyo was the main man for Gala, scoring 16 points to help down the Spanish side. "It is a very important win for us," said Ataman. "It's a really important win for many reasons. We have two important players missing because of injuries. Our back-up guard Nolan Smith made some undisciplined actions and he was out of the roster. He will not play for Galatasaray again. For this reasons we had some problems rotating players. We have some other problems as everyone knows. We thank our fans who came here and supported us. We were apart for almost five months and their ambition was a true force for us today. In the first half Carlos Arroyo, who is our leader on the court, played very good and the rest of the team kept up with him."