Efes look to march on without Krstic 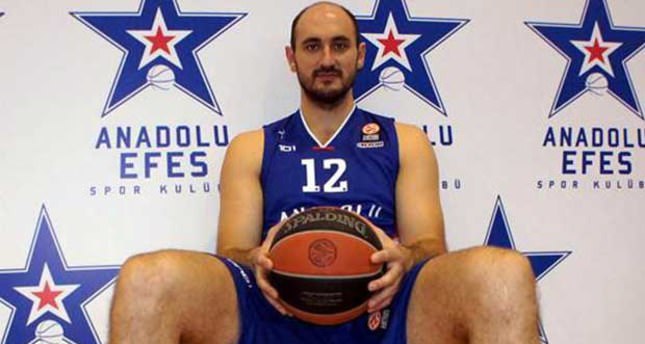 by Kenny Laurie
Nov 06, 2014 12:00 am
Anadolu Efes face a tough challenge today as they take on Russian newcomers Nizhny Novgorod without their star center Nenad Krstic. Dario Saric may also be missing from the contest. Krstic was diagnosed with a broken arm after a knock in their weekend game with Pınar Karsıyaka and will be out for around six to eight weeks, essentially ruling him out for the rest of the EuroLeague regular season. The injury comes a something of a blow with Krstic the team's leading scorer with 17.3 points per game. Anadolu Efes coach Dusan Ivkovic bemoaned his club's injuries and admitted that his team will have a battle on their hands in Novgorod. "Our game preparations are hard because we have two serious injuries," said Ivkovic. "Definitely Nenad Krstic will be out for approximately two months. Maybe we can take Dario Saric with us if everything goes well. "Nizhny Novgorod is a team which achieved a lot in a short period. They are Euroleague newcomers. I congratulate them for this. At the moment they are the leading team in offensive rebounds in the Euroleague. We have to take control of the game and be careful in boxing out. We have to play in the game as well as we can to win." Although Novgorod have are 1-2 after three games in the EuroLeague, their domestic has been perfect, winning all five of their regular season games so far. The onus will be on Cedi Osman and Matt Janning to step up in the absence of Krstic and possible absence of Saric. Janning called on his team-mates to bring their a-game for tough trip to Russia. "It is another important game for us in the Euroleague," said the American. "It is a long trip and a tough place to play at. They are very successful at their home court. We have to continue to play at the highest level as we can and get an important win."

Anadolu Efes are currently 2-1 in the EuroLeague and currently in joint second place in Group A, with Real Madrid leading the way with three wins in three games.

Elsewhere, Fenerbahçe host giants Barcelona in a clash of traditional EuroLeague powerhouses. Barcelona will be without their star guard Juan Carlos Navarro, although his absence hasn't held them back recently with center Tibor Pleiss and Alex Abrines stepping up to the plate.

The two-time EuroLeague winners travel to Istanbul with a perfect winning record, leading Group C. Fener had enjoyed a perfect record but suffered a defeat last week to Panathinaikos.

Coach Zeljko Obradovic is hoping ahead of the game that the home court advantage will give his team the extra edge.

"For us it is a very important game to play here at home," said the Serb. "First of all, we must change to offer a different image and behavior from the last game. I hope our fans will come to help the team and that we will have a good game."

Star forward Jan Vesely said, "We are expecting a tough game with Barcelona. They are a great team, one of the favorites for the Euroleague title. We have to play hard all 40 minutes and never fall asleep on little things. They have a lot of key players, and we must stop them. I hope our fans support us for this game because we need it."