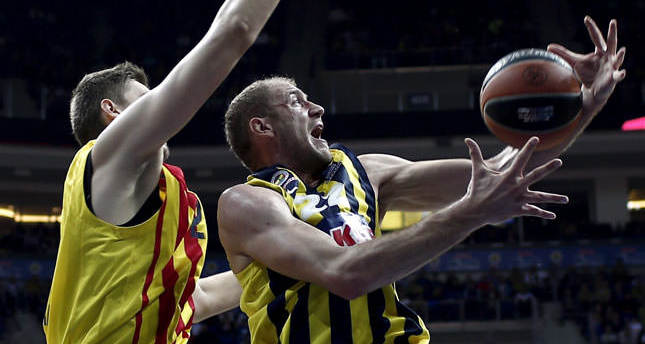 by Kenny Laurie
Nov 08, 2014 12:00 am
Anadolu Efes coach Dusan Ivkovic praised the performance of new signing Dario Saric after his side's 76-66 win over Nizhny Novgorod on Thursday night. The Croatian forward, who was an injury doubt before the game, stepped up in the absence of Nenad Krstic and scored 18 points in just 22 minutes as Anadolu Efes comfortably beat their inexperienced Russian hosts. A blistering second quarter, where the Turkish side held Novgorod to just nine points while scoring 21 themselves, set the tone for a relatively comfortable win that only threatened to tighten late in the game. After holding a substantial lead for most of the game, Anadolu Efes found themselves up against it at 72-66 after Taylor Rochestie hit a deep 3-pointer with a minute left on the clock. But a corner 3 from Stratos Perperoglou put paid to Novgorod's ambitions. Anadolu Efes shot Novgorod to depth, hitting 40 percent of their 20 3-point attempts while Stephane Lasme was dominant in protecting the rim, with three blocks. Ivkovic went on to laud the work of the up-and-coming Novgorod but singled out Saric for his match-winning performance. "In this elimination phase of the Euroleague it's of course important to win any game on the road," said the Serb. "I cannot be satisfied with Nizhny Novgorod scoring 42 points in the second half, but it was a chance to put young players into the game in a serious competition. Unfortunately, it didn't go as well as I expected, but we won and I wish Nizhny Novgorod good luck in the future. I think Dario Saric is a big talent and I was positively surprised with his game tonight. He played very good." Ivkovic was able to blood some younger players, including prodigious 17-year-old Furkan Korkmaz who scored nine points. While the Serb was happy with the experience they gained, he was disappointed by their overall output. Ivkovic said: "At this point of the season, it's very important to win a game on the road, especially because we had a series of injuries before this one. Nizhny Novgorod has a great system, I like them a lot. I also have some young players on my roster, a new wave in European basketball. But tonight they were not that good in the second half, when I gave them a chance. Nizhny played well in the second half, but again, I'm happy with the win, but not with the way we played in the second half."

Elsewhere back in Istanbul, Fenerbahçe went down 80-78 to two-time EuroLeague champions Barcelona with Emir Preldzic missing a 3-pointer in the last possession of the game that could have sealed the win. So often the man for the big occasion, Preldzic's 3-point attempt from the top of the key cannoned off the backboard and into Barcelona hands. Fenerbahçe had been leading for much of the game, being at 51-47 halfway through the third quarter. But within 10 minutes, Barcelona had opened up a 72-64 lead after Brad Olesen's 3-pointer. Ricky Hickman's jumper with a minute to go got Fenerbahçe within two points but the Turkish side failed to grab the all-important points. Fener coach Zeljko Obradovic was disappointed to be defeated but felt his players could be proud of their performance.

Fener's top scorer on the night, Luka Zoric - who had 16 points - said, "We lost a game which we could have won. Barcelona did the right things better than us in the right moments. We will keep on fighting."