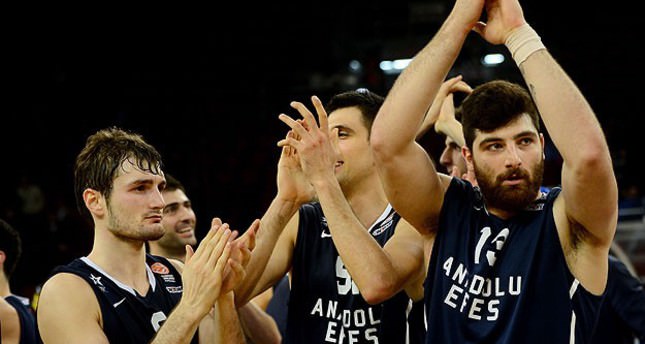 by Kenny Laurie
Nov 14, 2014 12:00 am
Anadolu Efes star Cedi Osman is hoping his side's 77-76 loss to Galatasaray at the weekend will help provide the motivation to overcome European powerhouses Real Madrid in today's EuroLeague clash. Despite good recent form, Anadolu Efes will be up against it today against Spain's finest. Star center Nenad Krstic is out for another month with an arm injury while the form guide against Real Madrid does not swing in the Istanbul side's favor. Madrid have won 12 of the 16 games that have been played between the two teams, winning 11 of the last 12 matchups. They will at least gain some insider knowledge from Dontaye Draper who spent the last two years at Real Madrid. A heartbreaking loss to Galatasaray at the weekend could have dampened morale within the team, but young starlet Osman believes it could be used as a springboard. "[Against Galatasaray] we made simple errors in the fourth period that cost us," said Osman. "I think we fought a good fight but sometimes it is not enough to fight against the best. More needs to be done against outstanding teams. But the game has given us hope for the future as a young team. Now we have our EuroLeague match against Real Madrid. We need to be prepared for winning a game in the best way against a good team." Anadolu Efes coach Dusan Ivkovic is aware of what a tall task awaits his side tonight in Istanbul. Real Madrid are yet to lose a game and they are the top scorers in the EuroLeague this season averaging over 95 points per game. The Spaniards are however without star shooting guard Rudy Fernandez but the rest of their prodigious roster should be there. "In the fifth game of the Euroleague we are playing against one of the most talented teams in Europe," said Ivkovic. "We have to play one good game first of all. After losing against Zalgiris Kaunas at home the importance of this game has increased. They have very high percentages in many categories in the Euroleague after four weeks. They are leading by 96 points per game, 26 assists per game, and have the least amount of turnovers among the 24 teams with 9.5. We have to take them into a lower level. We have three serious injuries as is known. We have to take control of the game and stop them in transition."