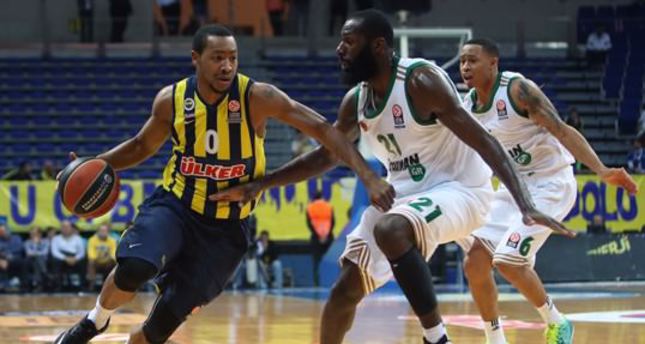 Fenerbahçe took revenge over Panathinaikos with a humbling win while Anadolu Efes beat Zalgiris in Lithuania with Ivkovic dedicating the win to his late former assistant. Both teams reached the Euroleague Top 16 with two games to spare

Fenerbahçe coach Zeljko Obradovic got one over his old team on Thursday night as his side put on a stunning second-half show defeating Panathinaikos 84-62. The Istanbul side now boast a 6-2 record in the EuroLeague Group C and have all but sown up the second seed behind the unbeaten Barcelona. Not only did Fener beat a fierce rival with an impressive scoreline but they helped open up daylight between the two sides, who had been locked in second place prior to tip off.

The home side overcame a slow first half to down Panathinaikos, the club with whom Obradovic won five EuroLeague titles.

"It was a nice atmosphere in the arena," said Obradovic. "I believe my players felt the support from the fans. We tried to play a good game, and the truth is our transition game and our set plays in half-court were bad. [In the] second half we changed, we played much better, starting with Drew Goudelock. That gave power to everybody to play better. Panathinaikos sometimes tries to play with four perimeter players, and we answered well to that."

For Obradovic, who is understandably a legend with the Greeks, the win was slightly mitigated by a weakened Panathinaikos. "Panathinaikos played without two very important players, big guys Esteban Batista and Loukas Mavrokefalidis, and Dimitris Diamantidis played only five minutes for some reason, and they are a very different team without them," said the Serb. "We are already in the Top 16, just like Panathinaikos, we will try to play better during the last two games. It is important the team plays with confidence. "

The Greeks certainly didn't seem to be missing their star players in the first half as they went toe-to-toe with the in-form Fenerbahçe, although they fell behind just before half time with the home team leading with a 36-32 score. In the third quarter, Fenerbahçe came alive, winning the individual period with a 31-16 score making a comfortable final quarter. Fener now sits in the driving seat in the chase for second place after the win that saw Semih Erden top scoring 14 points in just 14 minutes.

"It was a game that we needed to win," Erden said. "I think we played really good, especially in the second half. I'm trying to help the team whenever I have the chance to. And I'm happy when I do. Our coach, Zeljko Obradovic, is helping me a lot. I hope I play much better in the near future."

Elsewhere, Anadolu Efes comfortably moved to 6-2 with a win over Zalgiris Kaunas, 66-57. Efes coach Dusan Ivkovic gave a debut to 17-year-old Okben Ulubay who seemed completely unfazed, scoring nine points and hitting four of his seven field goal attempts. The win saw Efes overturn the defeat they suffered to Zalgris in Istanbul in round three. Ivkovic dedicated the win to his former assistant Aleksander Petrovic who sadly died at the age of 55 on Dec. 1.

"Maybe it wasn't the best quality game, but my guys deserved the win," said Ivkovic. "We had more desire, were playing great defense and were leading from the very first minutes. I want to congratulate [Zalgris], however, for a good start of the season and the win in Istanbul, but we improved tonight. Also I want to dedicate this win for Coach Aco Petrovic, who sadly couldn't see the game. He was my good friend, he was close to Zalgiris and it is heartbreaking that he isn't with us anymore. We still have two more games left and we need to work more to gain experience for the next round."